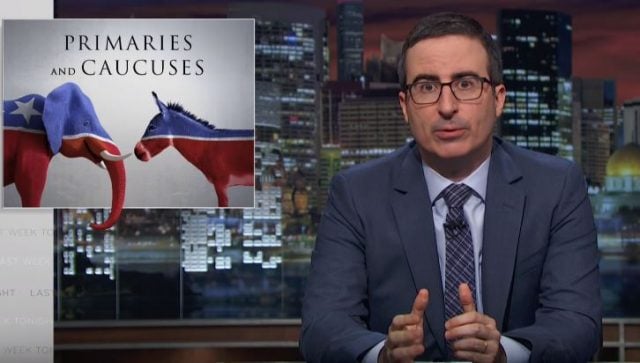 2016 has been quite the crazy election year, with anti-establishment candidates such as Donald Trump and Bernie Sanders becoming hugely popular with voters, but as John Oliver pointed out last night on Last Week Tonight, the real insanity that’s been hanging over this primary season has always existed. This lunacy comes from the primaries and caucuses themselves, as the process for both of them, in many cases, doesn’t even make any sense. Fortunately, the dysfunctional nature of the primary and caucus systems has received more attention this election year; however, as Oliver states, will anything really change unless we demand it does?

As John Oliver explains in the video below, there are a lot more problems with the primary and caucus processes than simply delegates versus superdelegates. Whether he’s describing the painstakingly confusing and overly complicated way that the remaining 13 delegates in Nevada were chosen in the state’s Democratic caucus, or the fact that Republican voters in Pennsylvania voters don’t know which candidates the delegates they vote for will be supporting at the convention because they’re what’s called “unbound delegates,” Oliver makes it clear that there a plethora of problems plaguing the primary process across numerous states. The issue is that people don’t seem to care all that much about it, even though they say they’re really angry.

“Listen, ifÂ Dancing With the StarsÂ had a system where instead of voting for directly for Paige VanZant or Ginger Zee, you had to vote for Doug or Karen to vote on your behalf, neither of whom will tell you which dancer they prefer, there would be riots in the streets,” Oliver joked.

Since so few people feel compelled to do something to change the primaries and caucuses, despite how upset they say they are, Oliver came up with a plan to organize efforts and hopefully make some type of difference last night on Last Week Tonight. He suggested that everyone who is upset with the current systems write an email to the chairs of both parties on February 2 of next year.

“Now that will be easy to remember because it’s Groundhog Day,” Oliver said. “Which does seem appropriate because unless this primary process is fixed, we are all destined live through the same nightmare scenario over and over again until the end of f***ing time.”

Watch John Oliver break down the the absolute insanity of the presidential primary process in the Last Week Tonight video below: