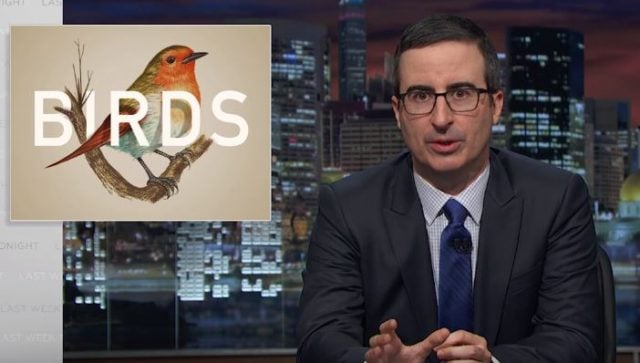 Last Week TonightÂ is currently on hiatus until the end of September. Fortunately, though,Â John Oliver and his team are still giving us new videos to look forward to every Sunday, shorter but still hilarious rants from theÂ Last Week TonightÂ host about anything and everything, including fashion, superheroes, and, most recently, birds.

In this Sunday’s all-new video, Oliver took three minutes to talk about the upcoming migration of birds. As many people know, ahead of winter, birds that live in places with colder weather travel to locations that have warmer climates “in order to feed, grow, and attract a mate.” Oliver compares it to “Eat, Pray, Love, except birds are too dumb to realize that everything they needed was inside of them the whole time.” And that’s not all theÂ Last Week TonightÂ host had to say to birds before they begin their trip; he had a special farewell message for all of them before their departure.

“F*** you, birds!” Oliver says to the animals in the video below. “F*** you! I hope you never come back. To me, every single bird is just a sh***y sequel to the dinosaurs, and we’d be better off without you.”

During his expletive-filled rant, John Oliver specifically called out geese, parrots, and hummingbirds, but nothing compared to the ire he showed for ostriches, who he referred to as “first-draft flamingos” and “a giant ball of lint trying to up-sh** a huge leathery snake.” Really, there was only one type of bird that was able to escape Oliver’s anger: penguins.

“You guys are actually fine,” he says about penguins in the video below. “I’ve got no problem with you, penguins, no problem. You get a pass, a lifetime pass for you, penguins.”