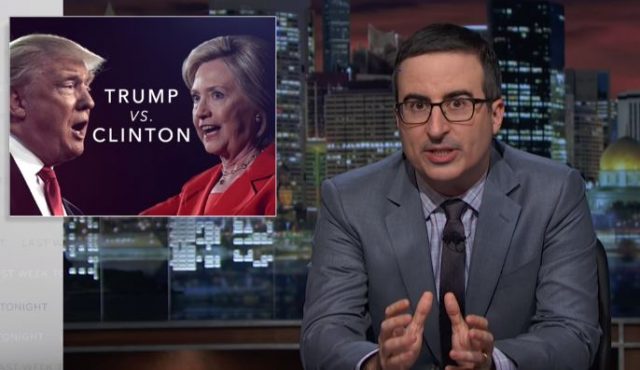 With the first presidential debate between Hillary Clinton and Donald Trump finally taking place tonight, John Oliver used his first episode ofÂ Last Week TonightÂ in a month to break down each candidate’s scandals. Last night on the HBO series, Oliver examined and provided details about the scandals plaguing both Clinton and Trump, as these issues have become more important during this election than either candidate’s policies. When it comes to the 2016 election for voters, it’s all about who they can trust more, and while the media may make it seem like both Clinton and Trump are equally untrustworthy, Oliver believes that the facts paint a much different picture.

During last night’sÂ Last Week Tonight, Oliver focused on Hillary Clinton’s email scandal and the controversy surrounding the Clinton Foundation. While he and his team found many mistakes and questionable decisions made by Clinton, there was nothing outright criminal in her behavior.

“Look, we’ve spent several frustrating weeks trolling through all the innuendo and exaggeration surrounding [Hillary Clinton’s] email and foundation scandals, and the worst thing you can say is they both look bad but the harder you look, the less you actually find,” Oliver explains in the video below. “There’s not nothing there, but what is there is irritating rather than grossly nefarious.”

However, when Oliver turned his attention to Donald Trump, or as he calls him, “America’s wealthiest hemorrhoid,” he discovered that the Republican candidate not only lies more than Clinton (A Politifact study shows that 13% of Clinton’s statements are false, while 53% of Trump’s are), but that his scandals also have much more specific evidenced attached to them. For example, Trump used his own charitable foundation’s money to buy a portrait of himself and then hung that portrait on the wall of a restaurant inside a hotel and golf course he owns.

But as Oliver explains in theÂ Last Week TonightÂ video below, that’s not all that Trump has spent his foundation’s money on. Watch to find out what else Trump has used charitable funds for. The answers probably won’t surprise you, but they might make you laugh.