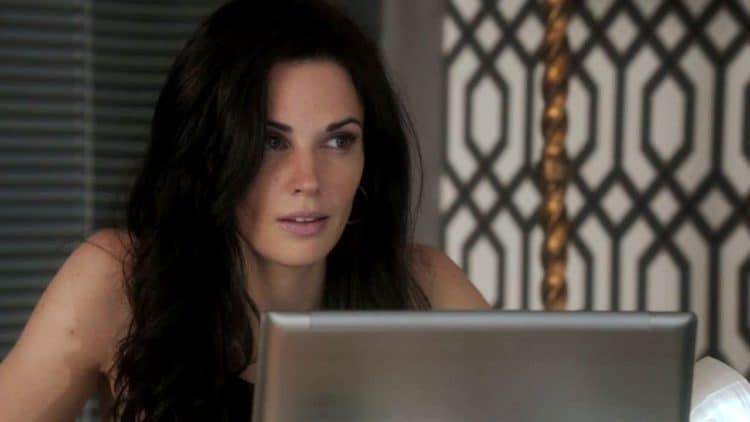 Laura Mennell loves acting so much that if she did not have bills to pay, she would do it for free. Her passion began at a tender age, and she got her first role when she was 17. Since then, she has been on “Project Blue Book,” “Man in The High Castle,” and “Loudermilk,” among others. She does not reveal much about her family background or her love life, but there is a lot you can learn from the numerous interviews she has done. Here are ten facts to let you in on her life.

Protein is necessary for any balanced meal, and until she was 15, Laura had gotten most of hers from eating meat. However, she had a change of heart due to her love of animals and decided it was time to stop consuming animal products. She did her research in animal cruelty, and what she found out about factory farming made her become a vegetarian.

When Laura talked to PETA, she revealed that black and white kittens always seemed to find their way home to her. She found Louie in an abandoned school in rural Manitoba, and Laura recalled that he was so scared to allow her to pet him. Still, the actress picked him up and fell in love with him immediately. Since she and her then-roommate, Jessica, already had two cats, she had to call and ask if Jessica was okay with another cat. When Jessica said she did not mind, Laura bought animal airfare and flew home with Louie. Before Louie, Laura had Michat whom she had rescued too.

3. She is selective about the shows for which she auditions

They say beggars cannot afford to be choosers, but Laura is past being a beggar in her career. Most actors admit that at the start of their careers, they accept any job that will help them put a meal on their table. However, they always tend to be picky once they find their footing in the industry, and so did Laura. In 2017, she decided to star in shows that are beneficial for her career and only those she loves.

Laura knew from an early age, she wanted to be in the creative industry, but despite being involved in music, dance, and art, it is when acting that she felt right at home. Therefore she enrolled for play-building classes at the Vancouver Youth Theater. Her passion led her to study acting in college, hoping to become an actor someday. Still, despite the intense love for the stage, her parents did not allow her to get an agent until she was a teenager; thus, Laura got one when she was 16.

5. She hates people who talk loudly while on the phone

It can be annoying to be next to someone who is talking so loudly on the phone that you know everything that is happening in his life. Laura hates such loud talkers, but she had to be one when she received the news that she would be cast as Mimi in “Project Blue Book.” At the time she got the call from her agents, the actress was in the store, and the excitement made her shriek in front of customers who turned to look at her, but Laura did not care. She was so happy that she forgot what she had gone to buy as per her interview with Violeta Nicola.

6. She must have coffee in her early shootings

Most early birds will swear by a morning cup of coffee to enable them to catch the proverbial worm; thus, when Laura has early shootings, coffee is a must-have. She especially needs it when she has barely slept, yet a full day of shooting awaits her. She, however, has to control her intake if she has a huge dialogue scene because then she will talk too fast.

If there is one thing, Laura has learned from her landing the role of Nina on “Alphas” it has to be patience. The actress kept sending the producers taped auditions while they kept adding notes concerning the character and her auditions. It seemed like they were not fully convinced she was the right person to cast as Nina and went as far as talking with the casting director. While she was waiting for her final screen test, the producers said they had decided to go another way but later changed their minds; thus, Laura ended up playing Nina.

8. Her challenge when playing Nina

If you have watched “Alphas,” then you must admit that Nina is one sexy woman who knows how to dress her body to captivate men. However, in real life, Laura admits that Nina’s wardrobe was not something she is used to; while Nina prefers stilettos, Laura would rather wear flats. Still, she had to depict her character well; thus, Laura had to learn how to walk in the six-inch heels that Nina wears. Moreover, she had to get used to running in stilettos, which she found even more challenging but now prides herself as an expert, according to The Morton Report.

Laura has, for the last four years, been an active participant of The Kidney Foundation’s celebrity auction called “A Brush of Hope.” Celebrities use their artistic skills to make paintings that are then auctioned on eBay, and the proceeds go to the organization. She usually uses social media to encourage people to bid on the paintings. The actress especially loves doing collages, and in October 2019, she did one of her cat Louie and told fans to bid on it for good karma and to support a good cause.

10. She does not believe in having a plan B

They say that if you fail to plan, then you are planning to fail, and you should not carry all your eggs in one basket. However, Laura begs to differ having been influenced by David Mamet’s “Truth or False” which advises people not to have a plan B. He reasons that if you know you have an alternative, you will not work hard at going after your goal, and Laura thinks she got to be an actor because she did not have a fallback plan.