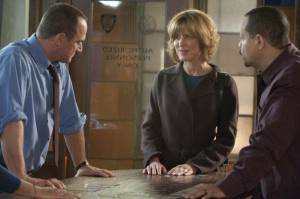 At a Take Back the Night rally hosted by Stabler’s daughter, Kathleen, a woman (Bethany) accuses a man (Chuck Mills) of rape. Fortunately, Stabler’s on hand to arrest Chuck. But the case turns out to be tricky. Bethany had been drunk at a party. She passed out and woke up to Chuck raping her. She reported it to the university and they brought Chuck in front of a university disciplinary committee. He got community service and a blemish on his record. ADA Sonya Paxton returns to do some probation with SVU in order to regain her position within the DA’s office. The lack of conclusive evidence means she orders them to cut Chuck loose.

Kathleen feels guilty because she was supposed to be Bethany’s sober buddy the night she was raped, but left Bethany for a short period of time. After getting information from his daughter, Benson and Stabler go to investigate the bar the girls were at that night and find Chuck hitting on another woman. A girl (Felicia) comes by to throw a pitcher of beer over his head and he pushes and injures her. When Felicia doesn’t show up to officially press charges, Sonya orders Stabler to cut him loose yet again. Kathleen delivers Chuck’s disciplinary committee file to her father, which one of her friends stole from her. This later becomes a sticking point because the file should be inadmissible if Stabler asked Kathleen to get it for him. Since he didn’t, he and Benson use the information and find out that Felicia has been trying to expose Chuck as a murder. She believes he killed his girlfriend Carla’s unborn baby (who was his baby as well).

Carla’s desperately in love with Chuck. She also seems willfully blind to any and all of Chuck’s faults, which drives me nuts about female characters. The night before she miscarried, he put something on his penis before having sex with her. The detectives are convinced that this chemical caused the miscarriage and when they arrest Chuck and get the chemical, Carla turns on Chuck. The chemical (misoprostal) which Chuck used is ulcer medication, but it’s also being used as an abortive chemical. Chuck claims he uses it as a stimulant when drunk, like viagara. 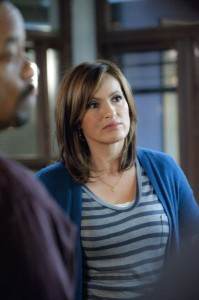 Chuck’s lawyer manages to systematically attempt to sabatage Sonya and the detectives’case. First she finds out that Carla had previously been pregnant and got an abortion and then tells Carla that no one will believe she didn’t cause the miscarriage. She also finds out that Stabler procured Chuck’s file by what she calls ‘unlawful means’. Stabler eventually convinces Sonya to not have Kathleen testify, fearing she’ll get kicked out of school. Sonya agrees to say a ‘confidential informant’gave Stabler the file. This seems like a pretty glaring hole in the plot. If the defense lawyer presumably knows how Stabler got the file, wouldn’t she continue to pursue it? Regardless, the lawyer then gets Judge Quinn to recuse herself and brings in a judge who obviously doesn’t like Sonya.

Sonya wants to give up and cut Chuck a deal, but Judge Quinn asks to speak to Carla (who still refuses to testify). She tells Carla that she was raped back in college, but her rapists were never charged. She tells Carla that she should stand up for herself so that she could get justice and Carla agrees. Unfortunately, Carla doesn’t show up in court the next morning and when Benson goes to her apartment, she finds her dead. Apparently, Carla died from toxic shock syndrome and her immune system had been weakened by the misoprosal. The detectives arrest Chuck for murder just before the episode ends.

What happened tonight is a classic example of something that SVU does well: we start with what looks like a regular case and then end up about fifty paces beyond where we actually thought the episode would go. When the writers threw in the ‘Carla and baby’twist I was surprised. Even though I disliked Carla at first, I thought the story of how Chuck caused the abortion was interesting (in a totally sick way, of course, but a very interesting twist). I also didn’t expect Carla’s death to happen at the end. While occasionally SVU will fall prey to creating an easy solution to a complicated problem (a last-minute witness shows up just before the case falls apart), this wasn’t the easy way out. Carla didn’t have to die. She could have shown up in court and Chuck could very well have been found guilty. I liked the entire storyline and found it very compelling.

Sonya Paxton was never one of my favorite ADAs. She wasn’t my most hated, but I found her character to be grating sometimes. But I liked her appearance here tonight. She was obviously trying to straighten out her life, but her smart-ass personality still shone through with every interaction between her and Stabler. I don’t think I would want her to come back as the regular ADA, but her appearance every once in a while would certainly be welcome.