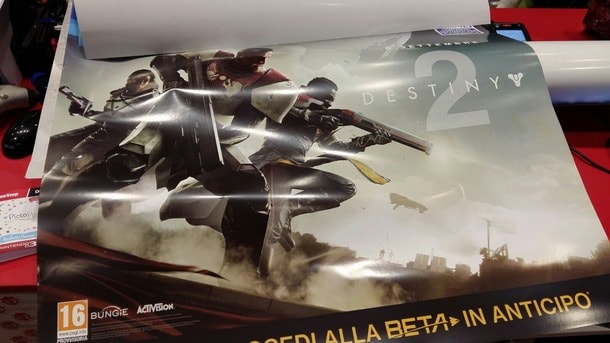 Bungie’s shared-world shooter Destiny has a sequel and that sequel is now confirmed to be launching in September.Â Â  Italian website Lega Network just leaked two posters for Destiny 2 which were allegedly leaked by a GameStop Italy.Â Â  The release date is said to be September 8th but if you look at the poster above you’ll also notice that there is also a forthcoming beta.Â  While we’re not 100% sure if these posters are real, multiple outlets are reporting that they are.

In addition to these leaks, gaming site Kotaku revealed that they think Bungie was set to announce a release date today.Â Â  As far as the September 8th date this may only apply to Europe as games here in the U.S. tend to debut on Tuesdays.Â Â  According to IGN

Last month, Activision confirmed that the sequel to Destiny is still on track for a 2017 release.Â Â  Now it’s not only confirmed but leaked as well.Â  My only response to this is if Bungie were going to announce the release date anyway this shouldn’t be a big deal.Â  If Bungie were waiting another few months to make their announcement this might be more problematic.Â  Then again, Kotaku isn’t 100% sure either.

Still though, at least fans have a pretty good indication that Destiny 2 is coming out September.