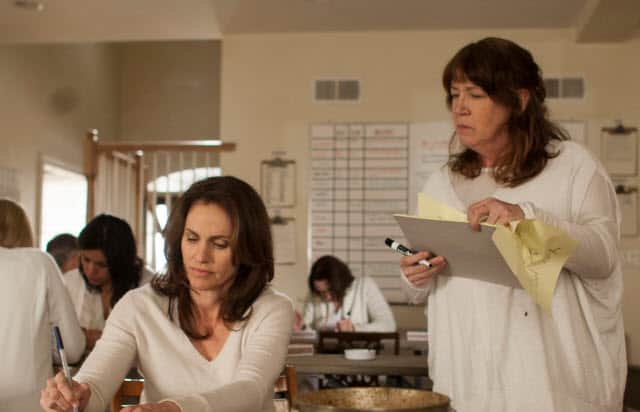 After an impressive series premiere, The Leftovers wastes no time developing its characters. Â This week focused heavily on Kevin and his questionable (in)sanity.

Last week Kevin witnessed a man shoot one stray dog at first, and later joined this mystery man in on the attack of a whole pack of dogs. Â Two weeks has passed without any findings on the investigation of this man or his truck. Â Kevin’s even been sent to a shrink because all signs point to him as being the one and only dog killer – especially when the truck is suddenly found in his own driveway.

Kevin starts questioning his own sanity after a bagel “disappears” from the toaster oven at work, so just imagine how crazy he feels when the same truck he’s been searching for shows up at his house. Â If it hadn’t been for Jill and Aimee walking into the house and noticing the man at the door with a case of beer in hand, we wouldn’t have any solid evidence that Kevin isn’t going nuts.

This all leads to him going to visit someone only previously hinted at in the pilot and earlier in this episode when Lucy mentioned she was going to visit “him” that night. Â Turns out Kevin’s dad is in a mental institution, which definitely leads to an interesting conversation between this father and son.

When asked how this all started for him, Kevin Sr. got the impression that his son thinks his “s— may be getting lost” but he advises him to tell the shrink he was drunk, stressed, and sorry about everything. Â Then we see the reason Kevin Sr. is in this institution, as he starts talking to someone who isn’t there.

Kevin Sr.: “They said they sent, or are sending somebody to help you.”

Kevin Sr.: “I don’t know. Â Whatever it is, you might want to keep it to yourself.”

Woah! Â In a world where the Rapture (or something like it) happened, it’s certainly probable for there to be some truths to Kevin Sr.’s delusions. Â Who does he talk to, and why did he seem so annoyed with them before finally passing their message onto his son? Â I hope we get to see more of these father/son scenes.

Back at the Guilty Remnant headquarters, Meg is having a hard time adjusting to her new surroundings. Â Since she asked to stay there voluntarily, I assume she can leave anytime she wants but something about the GR is intriguing to her. Â Of course because Meg isn’t an official member yet, she can still speak, so this allows her to have a one-sided conversation with Laurie using her notepad to answer her. Â (Stray observation: Â hasn’t the GR ever thought of using phones/tablets/computers to communicate? Â They must waste a lot of paper. Â Hope they recycle!)

Laurie’s being pressured by the Remnant leader to either be tougher on Meg or to “cut her loose”, whatever that means. Â By the end, it appears that Meg’s gone, only for us to see that she’s returned to the same tree Laurie took her to in the woods. Â She might just be getting used to the place now because she voluntarily keeps chopping away at it.

Unlike their parents, Tom and Jill Garvey have pretty dull storylines. Â Tom’s involvement with Holy Wayne’s cult is at least confusing as their camp is the target of the government. Â Tom gets Christine out of there as he was instructed to keep her safe, but you can tell he’s really not happy to be caught up in whatever this is. Â Wayne meets up with them at a deserted gas station and sends them back on their way after first destroying Tom’s phone (his last contact with his dad) and instructing him to keep moving and wait for his next call. Â It would only make sense if Tom went home for a little while, but with Christine in tow, there could possibly be other complications if Wayne were to call on them.

Jill had the least interesting storyline as she, Aimee, and the Frost twins stalked Nora Durst. Â Â All we know about Nora is that her husband and children were taken in the Sudden Departure and now she works as a sort of insurance agent. Â Oh yeah, and she carries a gun around in her purse, which is what sparked Jill’s sudden interest in her. Â It felt like there might be another connection between the two that we have yet to learn.

Nora’s line of work is strange but I guess it shouldn’t be all that surprising that there would be benefits paid out to families who lost loved ones in the Departure. Â This particular elderly couple Nora visits lost their mentally disabled son that day, and in order for Nora to sign off on their benefit form, they need to answer 150 random questions. Â I really have to wonder what her company is looking to accomplish by asking things like has the departed person ever been to Brazil and did they speak more than 1 language. Â Maybe she’s working for a bigger worldwide corporation just grasping at straws, trying to piece together any sort of logical explanation that everyone had in common? Â Who knows.

I’m still loving the show’s overall tone and theme. Â The mystery angle is only growing as we progress, but that’s to be expected from such a wild premise. Â It actually makes watching it that much more fun, wouldn’t you agree?