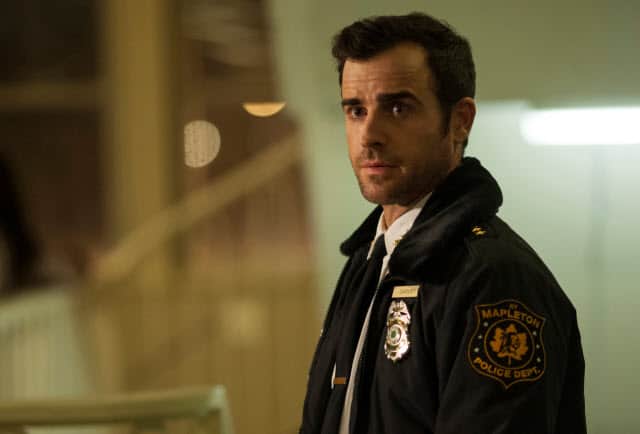 Pieces of the puzzle are slowly falling into place this week on The Leftovers. Â Not necessarily in the form of answers to the hundreds of questions already posed, but just enough information is learned to hopefully keep viewers hooked.

The opening scene of the doll factory follows the process of manufacturing, packaging, shipping, and selling one particular doll that becomes the baby Jesus in the Mapleton Nativity scene. Â It seemed pretty weird that Jesus would then go missing, but it probably surprised no one that Jill was responsible for taking it.

Kevin had no interest in wasting his time to find the stolen doll because he had bigger issues to deal with, like the Guilty Remnant crashing a holiday dance at the high school. Â I liked how he tried to set the GR up by begging Patti not to have them show up in silent protest outside of the school. Â He had his officers in unmarked vehicles around the perimeter of the property ready to arrest the protesters the second they get too close. Â Of course, they still showed up but it was important to note only a handful of the GR community were there and they didn’t even cross the line onto the school property. Â Kevin didn’t let that stop him as he gave orders to arrest them all because it was close enough.

Most of the Guilty Remnant members were spread out across town breaking into homes and emptying everyone’s picture frames of their loved ones. Â It was incredibly creepy to watch them as they walked past children sleeping in their bedrooms just to take all the pictures out of all the picture frames in different houses. Â At least it wasn’t a violent act, but still it’s breaking and entering.

Earlier that day, Laurie and Meg showed up at the Garvey house where Meg read aloud a letter Laurie wrote to Kevin accompanied by divorce papers. Â He refuses to accept them, let alone sign them and give up on their marriage after six months of her never even talking to him. Â He rightfully gets angry and yells just as Jill walks in. Â She gives her mom a Christmas present she had wrapped for her under their tree. Â It’s an engraved lighter that says “don’t forget about me.” Â Because Meg was with her and Laurie probably wouldn’t trust her to not tell anyone at the GR that she’s keeping a gift from her family, she threw it down a sewer grate. Â I was shocked when Laurie went back later to get the lighter. Â Maybe she’s not completely a lost cause, but there’s definitely lots of issues behind her madness.

For one, we learned in her letter to Kevin that he’s not Tom’s real father. Â She thanked him for raising him as if he was his own. Â That only makes this family that much more complicated, but like I said it felt like a tiny piece of the puzzle was solved in a strange way. Â Kevin slept in Tom’s room that night and in the morning he’s looking through pictures on a bulletin board. Â One happens to be of Laurie and his father. Â Hopefully we get to see some flashbacks to Laurie and Kevin’s relationship early on, including the fallout with Laurie’s ex.

Speaking of Tom, he’s still on the road with Christine just waiting to hear from Wayne about what their next move will be. Â Christine was attacked by a man exclaiming he saw her in his dream and that he knows what’s inside her. Â Surprise, she’s pregnant with Wayne’s baby. Â This isn’t news to Christine or Tom, but it does shed a little more light on why Christine is so important. Â Since they say six weeks have passed since they last saw Wayne, at this rate we’ll probably see the baby born by the end of the season.

Wayne and his followers are still quite the mystery. Â When Tom and Christine have broken out of the hospital to keep moving per Wayne’s orders, the bus they’re on is stopped due to a bunch of what appears to be dead bodies strewn across the road. Â The people in the stopped traffic didn’t look completely horrified so I don’t think they were actual dead bodies, but maybe just dummies that were all dressed in white. Â Christine points out to Tom that it’s just like in her dream. Â Alrighty then. Â So either these dreams are prophecies (of what exactly I don’t know yet) or maybe it’s possible this is Wayne’s doing and it’s his way of communicating with Tom and his baby mama that they’re on the right track.

That just leaves the case of the missing baby Jesus. Â Jill took the doll but her friends all knew about it. Â Interestingly enough, Aimee asked her why she doesn’t just give it back to her dad because she saw how much he has on his plate already. Â Jill sets the doll out on a makeshift raft in a little stream of water, doused it with alcohol, and was about to throw a flaming arrow at it before she had a change of heart. Â The next morning, the twins return the doll to the Garvey doorstep and Kevin never even knew Jill was responsible for it.

One last revelation made in this episode was when Kevin admitted to Nora that he cheated on his wife. Â We only very briefly saw that Kevin was in bed with a woman when the Departure occurred, but it wasn’t clear if that was Laurie or not. Â It’s still unknown who he was with, but I count that as a partial answer leading to even more questions, naturally.

What’d you think? Â Did you catch that Kevin lost all control over his car just when he was cursing Jesus’ name under the pressure to find the missing doll? Â What was that all about?