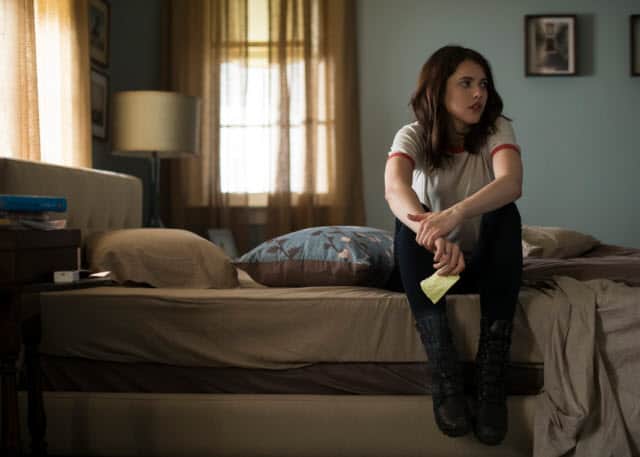 Things are finally moving along on The Leftovers. Â I have been wondering when we’d see more of Kevin Garvey Sr. because of his very interesting connection to “voices” around him. Â Plus, with the random time jumps between every episode, it’s already time for Christine to give birth.

After receiving a strange call from Wayne with an order to leave $3000 taped under a mailbox immediately, Â Tom makes the money drop and waits around to see who picks it up. Â He follows the guy to a shady motel room where Tom busts down the door, convinced that Wayne is inside. Â Imagine his surprise when he finds a pregnant Asian woman and her protector. Â Christine isn’t the only girl pregnant by Wayne it seems. Â Tom still isn’t buying into Wayne having a grand master plan but it’s clear that he’s probably alone in thinking this. Â He gets himself shot in the hand by this pregnant lady who is hysterical about something Wayne said or did about her baby. Â Oh, and Christine delivered her baby herself by the time Tom got back to her. Â This whole storyline is the most confusing and I’m really just waiting for it to tie in with Kevin, Jill and Laurie at least.

Meanwhile Jill is out with her friends who join in a stupid tradition to lock someone in a refrigerator and see how long they can last before running out of air. Â Jill sweats it out and sets a new record but the handle broke when they went to let her out. Â Lucky for her, her grandfather had just escaped from his psychiatric institute and happened to come across the teenagers in the woods. Â He saved Jill, who of course has to tell her dad that his own father is somehow out of his hospital.

Kevin finds the peanut butter jar buried in his yard with the note from his father to Reverend Matt Jamison. Â He immediately goes over to Matt’s house, which happens to be the headquarters responsible for the “Save Them” posters with Gladys’ face on them. Â No surprise there. Â Matt is with his father but they still need to get “something” for him so they set up a time and place to meet.

The May 1972 edition of National Geographic is what the voices instructed Kevin Sr. to present his son with the following instructions: “Your services are being requested. Eyes open, wide awake. This is your invitation. This is your purpose.” Â When Kevin rejects this insanity, his father flips out and starts shouting things like, “Fine! Don’t wake up. Â Go back to sleep!”

This most recent conversation with his father may have finally gotten to Kevin’s head. Â After he and Nora sleep together for the first time, he whispers that he think’s he’s going crazy. Â I find it hard to believe that he’s only just now starting to think this. Â Viewers have all suspected it since the pilot.

Kevin’s dreams and apparent blackouts are definitely a clue to his insanity. Â It’s a curious thing that Dean showed up in his “dream” outside of Kevin’s house, inviting him to shoot a dog he had trapped in a mailbox. Â Then when Kevin wakes up on his bedroom floor with a bandage covering a dog bite on his hand, he even finds a dog tied up in his yard. Â Aimee was the only one to see him the previous night when he brought the dog home but she’s even noticing that Kevin probably doesn’t remember anything himself.

The Guilty Remnant weren’t around much this episode, but it looks like we may finally get Patti’s backstory next week. Â Until then, what do you think is the significance of the National Geographic from 1972? Â Do you think we’ll ever even get answers to half of the mysteries on this show?