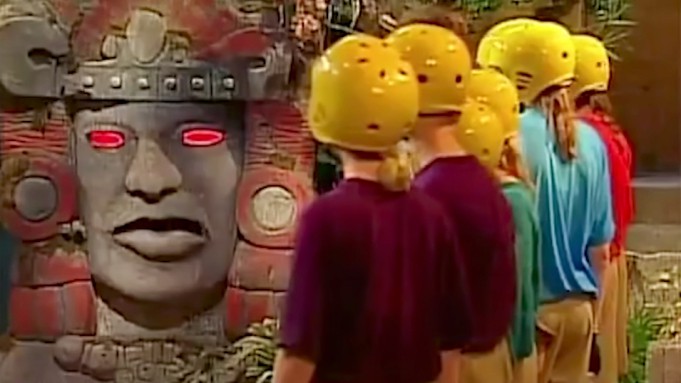 No, nostalgia still isn’t done when it comes to bringing back old shows and movies, and this time the CW is stepping up to bring back Legends of the Hidden Temple, a popular game show that ran in the mid-1990s and was a popular program on Nickelodeon when it came out. Some folks might still remember Olmec the talking stone head, and the challenges and hidden treasures that awaited the kids that would take the challenge. It’s been 30 years, roughly, since the show was out, and despite the fact that this show was bound to be shown on Quibi, which folded pretty quickly when it tried to be a contender, the CW swooped in and picked it up to try and make it work. It’s not hard at all to see that the CW is doing whatever it can in order to stay competitive since the network has been staying where people can see it for a while now as it’s taken on one show after another and kept people interested with the content they want to see. With Legends of the Hidden Temple, there was bound to be a need for change though, and the CW has managed to come up with a way to keep the interest and update the show while still keeping the general idea of it alive since instead of being for kids, this time around it will be adults that are going to be taking on the challenges. Several of the aspects that made the show what it was will be kept, such as Olmec and the other aspects such as the Steps of Knowledge and the Temple Run, and the teams will remain, the Blue Barracudas, the Red Jaguars, the Purple Parrots, and so on. Even the basic concept will be adhered to and remain mostly intact. Getting the original host, Kirk Fogg might be kind of a challenge, and there’s no telling who will voice Olmec this time around.

But instead of kids playing the game, this time it will be adults that are taking on the challenges, which means things are going to get harder and the overall look of the game is going to be different to cater to a different age group. One can only imagine how the difficulty level will raise when it comes to using adults, and the physical and mental aspects of the game will have to increase quite a bit in order to push the adults in a way that will remain competitive but offer up some type of challenge. The original host made it clear that the original temple was hard enough to run, but it’s fair to think that contestants for this show are going to need to be screened and made well aware of what’s going to be waiting for them since bringing back the show as it was might not be such a good idea, if only because it would be more of the same and therefore not as entertaining. There’s no need to go hardcore, but the challenges still need to be hard enough that it’s not a total cakewalk. The game shows back in the 90s were fairly deceptive apparently since it could look as though people were simply walking through them, but as Fogg relates, a lot of the challenges were kind of rough and not nearly as easy as people made them look. The kids’ version was hard enough to get through, so it’s fair to say that the new version will be difficult for the adults to get through and might be kind of impossible for those that aren’t in decent shape to make it through.

The point of course is to challenge those that make the attempt to get through each challenge, but it’s likely that this show won’t be featuring a wide variety of body shapes simply because the difficulty might be a bit too much for some folks. It might not sound too inclusive, but the fact is that for shows such as this it’s best to pick those that are actually in pretty good shape if the challenges are going to be physically taxing since there’s no need to embarrass or humiliate someone on TV and there’s definitely no need to risk their health in such a way. There’s no doubt really that the challenges will be more difficult but that experts will also be on hand in order to make certain that things stay within the boundaries of what’s considered to be reasonable for each challenge. Fashioning this game for adults is bound to be interesting since if anyone remembers the show then they’ll already know that it’s not bound to be entirely easy, but it’s not going to be nearly as hard as other shows where the expected fitness level is so extreme.
Prev Article Next Article