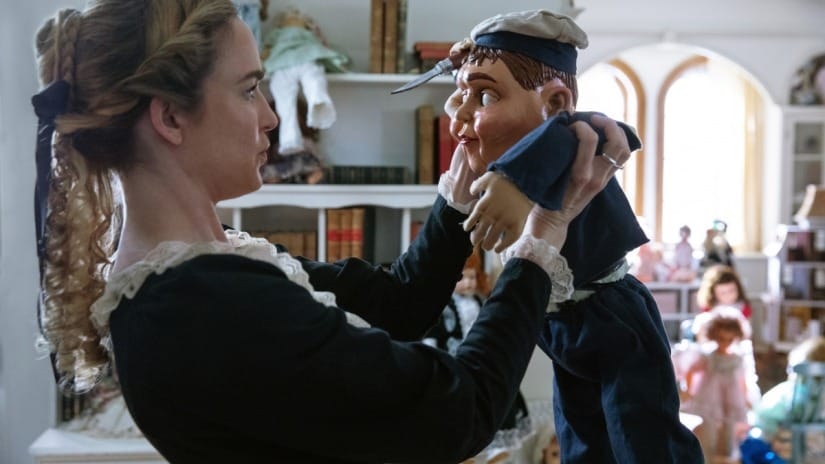 We all know that if we change the past, it would inevitably change the future. In this week’s episode of Legends of Tomorrow, Constantine tries to change his past to save the one he loves. The team take on a killer doll in 1856 New Orleans. Yeah, you heard right, we have ourselves aÂ ChuckyÂ situation.

The whole serial killer doll narrative is an interesting spin on the Legends narrative. I mean, it’s not every day that a group of history-saving superheroes take on a possessed doll. Though I do wonder who Mike the Spike is? Ava mentioned him when she revealed her hobby of reading about serial killers, but we never knew what his criminal history was. I gasped when the Dybbuk took over the Professor Stein puppet. While it was cruel, to an extent, that the show would use the doll like this, but it is the only doll onboard the Waverider. On the plus side, we get to see Professor Stein again, even though it’s not technically him.

Meanwhile, our resident Hellblazer attempts to change his past by preventing him from ever meeting Desmond, the man he ever truly loved. Constantine’s first attempt did not work out given that he still met Dez a couple of days later instead of at the local pub. At first, I figured that he wants to change history so that the demon Neron never comes after him and takes Desmond to Hell. Then we find out that it was Constantine’s doing. He asked Dez to leave town for his own safety, but the latter went behind his back. Dez made a deal with Neron to spare Constantine’s life and eventual eternity of torture in Hell. The demon bound himself to Dez, leaving Constantine no choice but to kill the man he loves. Ah, the tragedies of love. Makes me feel sympathetic toward the Hellblazer.

Back to the killer doll, Mick managed to incinerate it at the party, but the Dybbuk manages to escape from the charred sailor doll and, of course, took refuge in the Professor Stein puppet. The team was about to do battle with it when Constantine finally got his wish to change his tragic past. A ripple effect tore through the entire city of New Orleans, the Time Bureau and the Waverider. This caused those on the ship to freeze like Amenadiel stopping time with his powers. Zari, when taking Charlie to get Constantine, got herself turned into a grey tabby cat. In the infamous words of Happy Quinn-Curtis: Not good.

Aside from the whole tragic love story and killer puppets thing, we get some comedic relief in the form of Gary and Nate. The former wants to ask Mona out on a date but doesn’t know how. He tries to flirt with her when she came in, though that particular method did not quite work. Gary, stop using those masochistic dating tips that degradeÂ women! This is 2018, okay? Get with the times!

On the other hand, I do give kudos to Nate for helping Gary out. Then again, it seems that Mona is more interested in the Konane than Gary. The creature noticed Mona’s cut and Gary did not and if that’s not caring and considerate, I don’t know what is. The creature then escaped capture/torture when Mona shows up and stopped the two guards from zapping it with a stun gun.

We can only hope that he doesn’t wreak havoc or else things would not bode well for Ava when she returns to the Time Bureau. She’s the one in charge, she should be making sure that everything is running smoothly. A mishap like this could spell the end of the Bureau and she, Nate, Gary, and Mona could end up losing their jobs. At least Hank Heywood isn’t around to keep a closer eye on things, but I’m sure that he’ll know about this soon enough.

A clip from the upcoming mid-season finale shows the Legends have become puppets themselves. Could it be the effects that Constantine set into motion when he altered his past? It does kind of remind me of that episode of Angel where Angel got turned into a puppet. Cracks me up just thinking about it.

Ray growing a moustache for Nora. Very Justice League Henry Cavill. We got to see another movie Superman grow a ‘stache.

Sara taking credit for making the roast when it was Gideon who did all the work. I LOL’d.

Loved the kiss for good luck scene with Ava and Sara before splitting up to look for the Dybbuk. So awesome!

Charlie’s shape-shifting powers are the key to her immortality? Huh. Did not know that. Glad she was able to get her powers back though. There’s no word on whether Maisie will stay with the cast as the fourth season goes on. I’m hoping she would. I love her punky British attitude that she incorporates into Charlie. That and it was great to have her be Amaya again, even if it was a part of Constantine’s plan to change history.