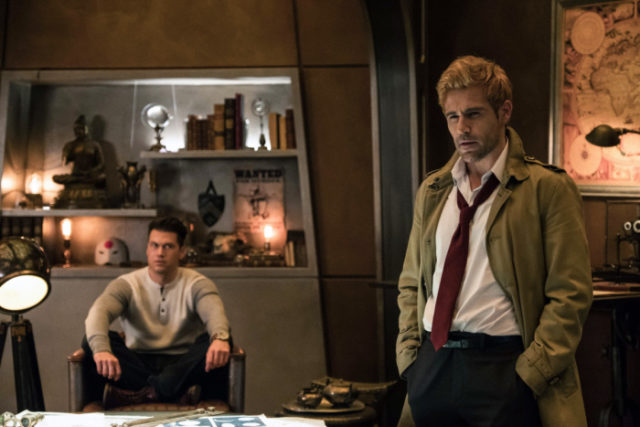 Damien Darhk said it best. Family reunions can suck. On tonight’s winter premiere of Legends of Tomorrow, abysmal family reunions are the least of Team Legends worries. Mallus has taken control of a little girl, and it’s up to an accomplished warlock that we all know and love to exorcise it. On top of that, Kuasa is back, and she wants to stop the Legends from destroying the demon.

It didn’t surprise me one bit when Emily turned out to be Nora Darhk. Well, I guess it did surprise me a little given that it’s been a while since the mid-season finale. Aside from that, it’s nice to hear John Noble’s voice again. Hopefully, we will see him in a more physical form rather than speak through a vessel as the season continues.

I got confused when Constantine (Matt Ryan) tried to expel Mallus again when he, Sara, and Leo got transported to 1996. I understand the importance of not giving up after failing a few times, but the warlock’s chants don’t work on the demon. Perhaps it’s time to find another way to dispel Mallus now that he has influenced both Nora and Sara? Then again, I have a feeling that Nora will still head to the dark side in the end. As for Sara, one can only hope that she can fight the temptation until this is all over. Is it too late to get Constantine back?

Meanwhile, Amaya and Nate take on Kuasa when the water sorceress found her way to 1996. At first, her motive is to stop the Legends from letting Mallus take over Nora. Then it became about her tragic past and how she blames Amaya for not taking action to change history. In the end, Amaya offers to help her granddaughter. I pray that she knows what she’s doing. Don’t want another Flashpoint anytime soon if you know what I mean.

Back to the mission, I held my breath when Sara stopped drawing the rune symbol to take her team and Constantine back to 2017. I assumed the worst seeing that Mallus has effected Sara to the point where he almost possessed her before the semi-steamy make-out scene with Constantine. Relief washed over me when Sara finished drawing the symbol after she consoled Nora in the spirit realm. That was too close a call.

As the episode drew to a close, we say farewell to John Constantine as he heads to expel more demons. Before he exited the Waverider, he advises Ray to keep his anti-magic gun close in case Sara goes off the deep end. Fingers crossed that it won’t come to that, but it would make for some good television. We also say goodbye to Leonard Snart as he returns to Earth-X to ask Ray (his Ray, not Ray Palmer) to marry him. Best of luck to your new adventure, Leo! Come back and visit the Legends sometime!

I sweat-dropped at the scene where Sara and Constantine indulged in some carnal delights at the mental hospital. They both argued that they seduced the other towards the end of the hour but let’s face it, Constantine was the one who seduced Sara when he gave her that card with the white and black canaries on it.

Kudos to Mick for showing some leadership qualities in this episode. Granted, it was to get everyone out of the room so he can watch the football game in peace, but I still applaud him for it.

I feel sorry for Nora a little. She has been through a lot, but it seems that her father has something sinister planned for her. Maybe she can somehow escape from it all, though there’s a chance that she might succumb to the darkness.

Rip has escaped from Time Bureau custody. Where has he gone and what is he up to? Will he contact the Legends?

John Constantine pays Team Legends a visit and they accompany him to a psychiatric hospital where they are surprised to learn who Constantine is trying to help. Amaya and Nate once again come face-to-face with Kuasa on tonight’s Legends of Tomorrow.