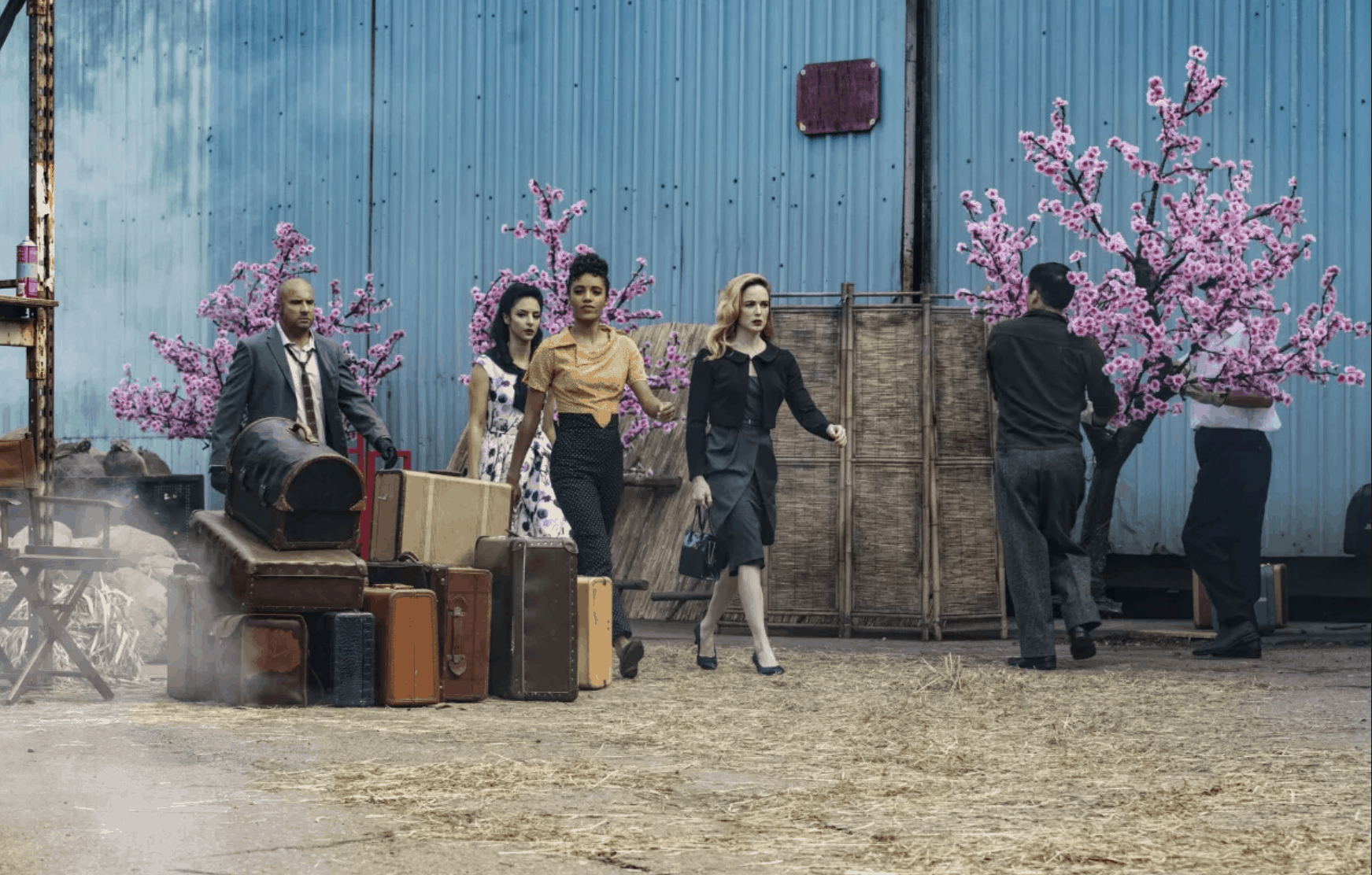 It’s the DC Comics version of Godzilla in this week’s episode of Legends of Tomorrow. The team heads to 1951 Tokyo, Japan to apprehend a larger than life land octopus called Tagumo. Ray tracks down Nora Dhark so he can save Constantine while Nate and Ava join the Heywoods for Thanksgiving dinner. This should be interesting, yes?

The hour began with Ishiro Honda and his crew filming a scene at Tokyo Bay. An actress is putting what looked like oysters into a basket and after Director Honda yells “cut”, he lifts the woman out of the water. Then a large octopus appeared from the depths of the bay and of course, Honda documented everything. Cut to the present, we learn that the creature completely destroyed Tokyo and it’s up to Team Legends to stop the catastrophic event from happening.

Meanwhile, Constantine is struggling to recover from giving a bit of his life force to Randall in the previous episode. Ray manages to find Nora Dhark at the Renaissance Fair where a burly-looking man is being gross and inappropriate by taking pictures of her cleavage. She then boards the Waverider and attempts to cure the Hellblazer. The latter vehemently refused treatment because Nora is clean and untainted by dark magic and he wants to keep it that way. He did, however, give her a choice: she can save him by giving him her life force but she has to do it for herself and not for him or as a favor to Ray for helping her escape from the Time Bureau. In the end, she saves Constantine with Ray’s help, and the Hellblazer proceeds to have a smoke soon after being cured. You never change, do you, Johnny-boy?

Back to the monster octopus, Sara, Zari, Charlie and Mick discovers that the creature is of Director Honda’s creation. The filmmaker made Tagumo from a magic journal created by the Celtic Goddess Brigid. Its pages allow the artist’s words and drawings to come to life. Unfortunately, Director Honda drew Tagumo to understand the tragedy of the Hiroshima atom bombing in 1945. Mick, who suffered from Writer’s Block as he was trying to finish his novel, got a sudden hit of inspiration and brought one of his protagonists, Karima, to life and had her fight the semi-shrunk down Tagumo. The three-breasted alien queen then makes out with Mick after vanquishing the octopus. Of course, they do more than that according to Mick’s writings, but the show still keeps it PG-13 so parents don’t need to shield their children’s eyes when watching.

That secret phone call that Hank Heywood took at the end feels suspicious to me. He wants to control the magical creatures in some way through something called Project Hades. What is Project Hades? Just when I was beginning to like Nate’s Dad, he goes and does this?! Guess we just met this season’s villain and it’s Nate’s father. Great, another evil family member to contend with. Happy Thanksgiving everyone!

When Mick told Director Honda that lizards are king, I know that he was talking about Godzilla. My feeling was right when Honda said “The King of Monsters” in Japanese.

Sweat-Drop Moment: Ava trying to stall for time while Nate helps Gary out with the escaped creatures at the Time Bureau. Not the best idea since everyone is hangry.

Amusing Moment: Both Ava and Nate telling Gary to shut up. I love you so much show!

The Japanese version of the show’s title is awesome! Feels like an anime or tokusatsu series.

That tender moment between Nora and Ray was so good. He gave her the Time Stone, telling her to run, but Nora says that she’s done running. She transports herself and Ray to the Time Bureau where a group of agents apprehended her. Nora tells Ray she must pay for her past as it will help her on her path toÂ redemption. I have the utmost confidence that she will be redeemed and use her magic for good rather than for evil. SheÂ didÂ just save Constantine from certain death, after all, so that’s got to make her feel all warm and fuzzy inside, right?

I noticed the paraphrase of Biff’s line fromÂ Back to the Future when Hank said “Let’s make like a tree and leave!” to which Nate said, “I don’t think that’s how that goes”. Kudos, show, kudos.

The play on the famous JawsÂ quote from Sara was pretty great. Bring on more movie references!

Question: How did Mona get out of the closet? Did Gary not lock it properly or did she somehow gain lock-picking skills? I do not compute.