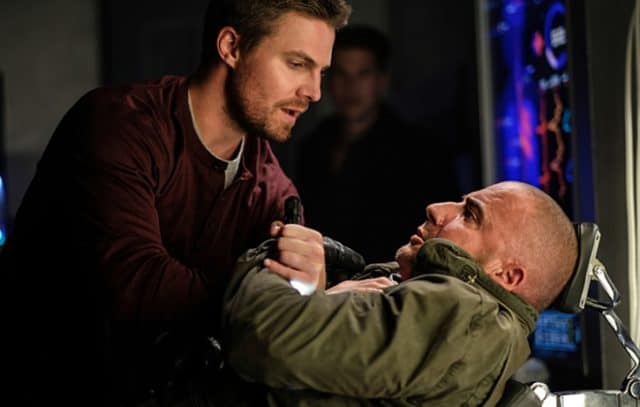 History, or time, for that matter, should not, under any circumstances, change. We’ve seen it happen onÂ The Flash where two wrongs don’t make a right. In tonight’s episode ofÂ Legends of Tomorrow, however, one has to change history to save history.

The hour begins with Dr. Nate Heywood (played by Nick Zano) running through City Hall. The time detective wanted to speak with Oliver about Team Legends. From what Dr. Heywood had said, Ray, Sara, Dr. Stein are scattered through time. It looks like there will be some rounding up to do. Except for Heatwave, who is unconscious courtesy of Captain Rip Hunter.Â I had hoped that Oliver would join in on the mission to find the rest of Team Legends, but I digress as he left the Waverider and presumably back to Star City.

I facepalmed when Jefferson jumped from the French palace balcony to join with Dr. Stein and become Firestorm. I agreed with Dr. Stein when he saw Jefferson falling toward him and said, “You have got to be kidding me.” The team, much to Captain Hunter’s chagrin, saved Louis XVI’s father before his assassination took place. Though the captain did tell them not to use their powers in front of people.

It was an interesting insight to see Albert Einstien behave like he still has the charm of a wealthy gentleman. The genius physicist tried to pick up two women at the physics symposium. Never learned about that in Social Studies class. The team then kidnapped Einstein before the Nazis could and brought him onboard the Waverider. An otherwise flawless plan had they not factored in his ex-wifeÂ Mileva MariÄ‡, who helped Damien Darhk and company build the atomic bomb.

There were a couple of familiar faces in this episode. As mentioned above, Damien Darhk made an appearance in 1942 before the creation of the atomic bomb that the Nazis used to level New York City. That and the Reverse Flash, who appeared at the end to take out the people onboard the German U-Boat. How did Eobard Thawne know about the nuclear, I mean atomic, bomb in the first place? Also, why is he working alongside Darhk like they know each other? I do not compute!

In the end, all the members of Team Legends have been rounded up. The whereaboutsÂ of Captain Hunter, however, is still unknown. Is he somewhere in history enjoying his semi-retirement or is he preparing for something that even Gideon cannot predict? I’m also intrigued by the appearance of the Justice Society of America. What do they want with Team Legends? Will Oliver make an appearance again since the Green Arrow is a part of the Justice League? Can’t wait to watch the next episode!

Legends of Tomorrow Season 2 Episode 1 Review: "Out of Time"

Team Legends is scattered through history and kidnaps Albert Einstein before the Nazis do in this action-packed season two premiere of Legends of Tomorrow.