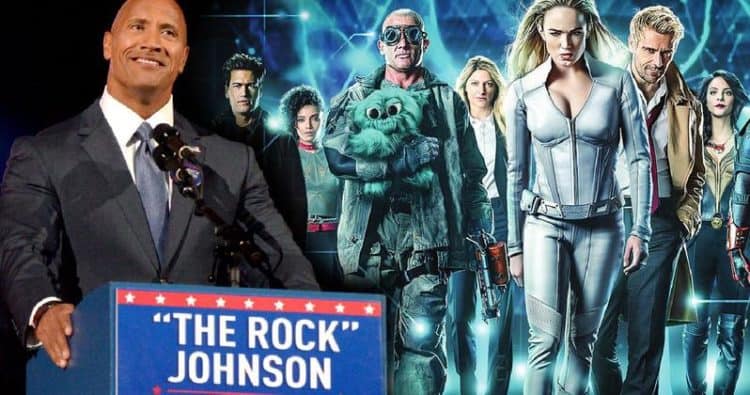 The next season of Legends of Tomorrow is making a bold prediction, but it’s not too far off the mark since it’s already been mentioned a couple of times already. It would be kind of a trip if something that’s been teased in reality and in a show actually came to happen, but at this time it’s hard to tell whether Dwayne “The Rock” Johnson would be a great fit for the United States presidency or not. The show is either making fun of such a possibility or perhaps throwing in their support, but the fact of the matter is that Dwayne Johnson has mentioned that if the people are willing to back him that he would run. If this is serious then in the next few years we could be seeing another actor vying for control of the White House. This isn’t the first time a show or a movie has made this kind of move however, though regarding the figure being selected for public office it is the first time that an actor has been placed in the role. If anyone remembers The One with Jet Li they’ll recall that Al Gore was made president in an alternate reality, which is what’s happening here obviously. Just imagine though if Johnson did become president. At one point it might have felt hopeful, that a man of the people might want to take office, but after all that’s happened in the last handful of years, it’s hard to say what will happen now since imagining someone coming in and squaring away the mess that the American government has become is kind of hard to do. There’s no doubt in the minds of many that it’s needed, but if Johnson is the person to do it then it might be time to take the fantasy out of it and make the move a reality.

There are plenty of people that want to debate about this since to be fair, some people think it would be a good idea and some think that it would be a huge mistake given that Johnson hasn’t been a politician for a long time. Some would say that’s a good thing, but others would just roll their eyes and keep arguing. At the very least the show has it easy since they can make their way from one reality to another and don’t have to wonder what might happen since there are separate realities where different things happen and there are different outcomes. The rest of us in the real world don’t have that luxury really, but it does feel as though this would be an interesting twist of fate that might happen since it’s not totally impossible that such a thing might occur. It would be insane, to tell the truth, but it would also be something that would go down in history for various reasons. Shows like Legends would probably be called predictive and even make people wonder if their writers are time travelers, but in the end, it would likely be deduced that there was a plan in place to get Johnson in as a candidate at least, if not the president. The next election should be interesting if Johnson is still bound to consider a run at the top spot.

Does anyone remember a time when Hulk Hogan stated that he might like to run for president? It turned out to be nothing, as he didn’t even bother trying, but the fact is that he said and even appeared to mean it for a short while. But it’s easy to wonder about whether Dwayne is just kidding or not since he sounds sincere when he talks about it. Plus, Johnson knows how to speak to people and get them hyped, and if he knew the right things to say when it came to politics, which isn’t hard to figure probably, then there’s no doubt that he could probably make a good showing of it. One thing the man has shown throughout his career is that he is an intelligent man with a great deal of natural charm that can sway a lot of people all at once. If his career in the WWE is any indication, Johnson knows how to talk to people and he knows how to get them pumped up. Give the man a crash course on politics if he needs it and there’s a good chance that we’d be seeing him as number 47 to continue the decade, and possibly to close them out if he’s that good. It’s more of a fantasy at this point and there’s no telling if he’ll even run for office in the next few years, but Legends is definitely pushing the idea that something could happen, even if it’s for the sake of the show.