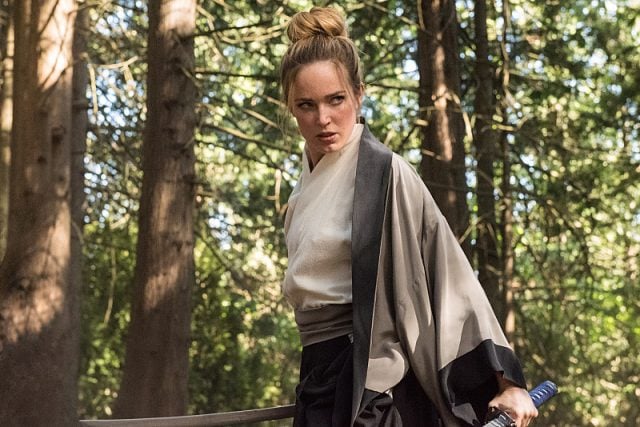 Team Legends take a brief detour to Feudal Japan in tonight’s episode of Legends of Tomorrow. Nate discovered that he has powers after the modified Nazi serum, turning him to Citizen Steel. I think he’s like the Silver Surfer without the surfboard.

The hour began with Amaya/Vixen knocking everyone onboard the Waverider out because she thought that the Legends killed Rex Tyler. I figured that she would jump to that conclusion since Rex muttered “time traveler” before he died. Sara’s description of another time traveler might give Amaya a clue as to the identity of the real killer. We, of course, know that it’s the Reverse Flash/Eobard Thawne that did the deed.

Ray attempted to train Nate and his new powers, but the latter accidentally opened the hatch and flew out into the timestream. Ray then went after Nate which resulted in them landing in Feudal Japan, or the Edo Era to be precise. Where’s Inuyasha and the gang when you need them? Oh, wait, wrong show. Oops.

It also amazed me that everyone in Feudal Japan understands English. Maybe the rest of the team swallowed the language pills beforehand. It’s also amazing that Masako knows the Yoda quote “Do or do not, there is no try.” Star Wars doesn’t exist in ancient Japan. I know that the show enjoys these references to modern culture, but it has to make sense in the period that the episode is set in.

Meanwhile, Jefferson and Dr. Stein stayed behind on the ship this time around. The former made the repairs to the Waverider, and after a diagnostics report from Gideon, they found out that there’s a secret room on the ship. Jefferson didn’t want to open it, even working in something he learned from watchingÂ Lost, but curiosity won in the end. It turns out that Captain Hunter has a secret weapons room onboard. The question is, how were Jefferson and Dr. Stein able to decipher the combination lock on the door? That and the message from future Barry (wonder if he’s still the Flash after forty years?). What is the message, show?!

The part where the Shogun wore Ray’s ATOM suit confused me. If it was designed to fit Ray, how did the Shogun figure out a way around it so that the suit would fit him? Need some context here! Shame the suit had to be blown up in the end, but I’m sure that Ray can design another one. Might take a little time, though. Totally agree with Masako’s father. Armor is easily replaceable, but the person wearing it is not.

I’m glad to see Sara step into her role as Captain. She handled the situation in ancient Japan like a real leader should. That and still be incredibly kick-ass. I have a feeling that she knows what Jefferson and Dr. Stein were up to while the rest of the team were saving Masako’s village. Just need to figure out what.

In the end, Masako’s village is safe from the terrorizing ways of the Shogun, and the young woman is now the village’s protector. Mick also got to see some ninjas in action which was cool. Amaya even gave him a ninja star (or shuriken) at the end of the episode as proof that ninjas exist. I applaud you, show. I applaud you.

Nate gets new powers, and he and Ray end up in Feudal Japan. Jefferson and Dr. Stein finds a message from future Barry in this week’s excellent episode of Legends of Tomorrow.