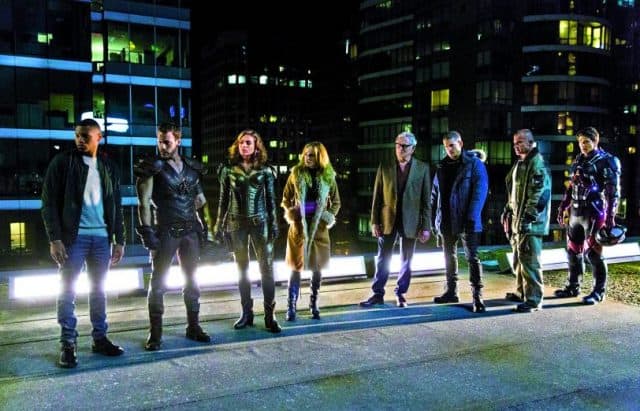 When Legends of Tomorrow was first announced, it sounded too good to be true. After all, it was a show that was supposed to mix time-travel with superheroes. As a Doctor Who mega fan who’s seen every single episode of New Who and The Classics and someone who grew up watching Arthur Darvill on-screen, I was totally hyped for the show. The fact that Snart and Ray were supposed to be in it was something more to look forward to. I always felt that Snart was the best weekly villain on The Flash, and Ray Palmer was the best supporting character Arrow had seen. And of course, there was Arthur Darvill himself to look forward to, a veteran of time travel himself.

Of course, we can’t talk about the show’s strong points without addressing the characters themselves. They’re like the gaggle of misfits you’ll see in a sitcom, except with superpowers. Snart’s the guy that cracks jokes, Rory is the thick one, Sara is the flirty one, Kendra and Carter are the lovesick couple, Stein and Ray are the geniuses while Jackson is just…there. A point to be noted is that these characters have excellent chemistry with each other and play off of each other’s strengths.

The dialogue is just the right mix. It can be funny, it can be dark. One of the show’s biggest strengths is it’s ability to alleviate tension through it’s dialogue, which is something every show needs. I’ve seen this in shows like Doctor Who and Supernatural so another show that could it was quite welcoming.

I know we did an article back on why Rip should be killed off, but now I’m not so sure. Sara’s proved herself more than capable of piloting the waverider, but Rip is definitely the one with all the knowledge. I know there was a moment in the finale where it looked like Rip was gonna die, but I really hoped he wouldn’t The baggage that Rip carried certainly did weigh down the show. But now, I think he’s come to terms with it. Call me a sucker for Arthur Darvill but I think he has a lot more to bring to the show than just unwanted baggage. Plus, he’s friends with Jonah Hex. How cool is that!

All of time and space, everywhere and anywhere, every star that ever was. Where do you want to start?

Yep, in time travel shows, one of the biggest thing that matters is the locations. After all, you can pretty much go anywhere and the possibilites are endless. How does Legends of Tomorrow make use of that? I’d say it still has some ways to go but it’s taken us into the Western era with Jonah Hex, lots of futuristic locations, the 1800s and other locations. I’d say it’s taken us more places in one season than many shows have in their lifetimes.

Willingness To Kill[Spoilers for Legends of Tomorrow, Arrow and The Flash]:

It’s something that’s very desirable in a show these days. If you’re not heartless enough to kill off major characters, then you’re a failed writer. The success of shows like Game of Thrones prove this fact. Legends of Tomorrow still suffers from the trend of bringing back dead characters but some of the deaths seem to stick. Legends killed off Snart and The Time Masters. Before that they killed off Carter and Kendra’s son. Now, it’s a trait that I relate with Arrow and The Flash. The Flash recently killed off Henry Allen, before that Eddie Thawne. Arrow killed off Tommy Merlyn and of course The Black Canary. Both shows are guilty of bringing back people too. Arrow brought back Sara and Ray, The Flash brought back Harrison Wells(in a different manner), not to mention bringing back Eobard Thawne himself.

Yep, I’ve said it before and I’ll say it again: the villains on Legends suck. Vandal Savage was a joke, The Pilgrim was an even bigger joke, the Time Masters were only there to look cool. I mean think about it. Compare the team’s powers to the powers of their enemies and you’ve got a recipe for a one-sided curb-stomp. You can read more about it here.

The Rules of Time Travel:

Is it surprising? No. Doctor Who has oft been accused of the complexities of time travel. But one thing I love about the show is that no matter how many times it breaks it’s rules, the rules are always clear to us. In Legends, we have no frickin’ idea how that works. In one episode, the legends kidnap their younger selves. How is that not a paradox? But despite that, they can’t go further back in time to kill Vandal Savage. How about kill him when he was a damn baby? No, that’s against the rules. Killing Vandal Savage is also against the rules. Legends of Tomorrow apparently has no clear sense of it’s own rules.

Oh yeah. The weakest links in the group. They weigh everyone down with their stupid eternal love story. What’s more is that they have absolutely no chemistry on screen. Carter has literally no character. He’d make a great addition to the faceless men. “I am no one.” Carter literally is no one. And Kendra keeps reminding us that she was a barista. We know.

Well, Superhero shows are famous for having terrible romance. Look at Arrow, hell look at The Flash. Look at Daredevil and you’ll know what I’m talking about. The romance that did work was the one between Sara and Snart which was technically just flirting. We all know how that turned out. Kendra and Ray suck, Kendra and Carter suck even more. There is no one you can ship on the show anymore. Which is bad.

Despite everything though, I really think that most of these factors will improve. Legends of Tomorrow still has the potential to turn into the best superhero show on Network Television. From what the writers promise us, there’s gonna be better villains next season. Maybe they can flesh out the rules more. Carter and Kendra can’t be fixed so fingers crossed for their death

Legends of Tomorrow returns this fall on The CW.

Legends of Tomorrow’s season 1 was quite fresh with colorful characters and interesting storylines but weighed down by different factors such as unmemorable villains and terrible romance.