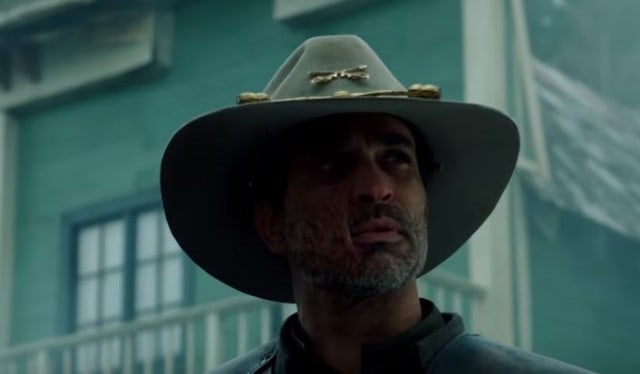 Legends of Tomorrow fans have been anxiously awaiting the arrival of Jonah Hex since it was first announced thatÂ Johnathon Schaech was cast to play theÂ famous DC Comics’ character. Tonight, that waiting comes to an end as Jonah Hex makes his debut when theÂ LegendsÂ team travels to the Wild West in an all-new hour, titled “The Magnificent Eight.”

So what’s the reason for this trip to the Wild West? Could Vandal Savage be there? No, he’s not; instead, it’s all about the team escaping and evading the Hunters, the vicious and violent group that won’t stop going after Rip, Sara, and the rest of the gang until they’re all erased from history.

In order to hide from the Hunters, the Legends of Tomorrow team heads to the time of saloons and six-shooters, and from this preview, tonight’s episode looks to beÂ another fun, wacky, time-traveling adventure for them all. However, there is one surprise that the sneak peek does offer: somehow, some way, Jonah Hex knows Rip Hunter, and he needs to speak with him now.

Legends of TomorrowÂ airs Thursdays at 8 p.m. on The CW. Check out the sneak peek of “The Magnificent Eight” below:

DC COMICS’ JONAH HEX MEETS THE TEAM — When the team needs a place to hide out, Rip (Arthur Darvill) sets a course for the Old West. Upon arrival, they start a fight with a gang of outlaws, putting the small town in jeopardy. Luckily, an old friend of Rip’s, Jonah Hex (guest star Johnathon Schaech), steps in to save them. Thor Freudenthal directed the episode with story by Greg Berlanti & Marc Guggenheim and teleplay by Marc Guggenheim.