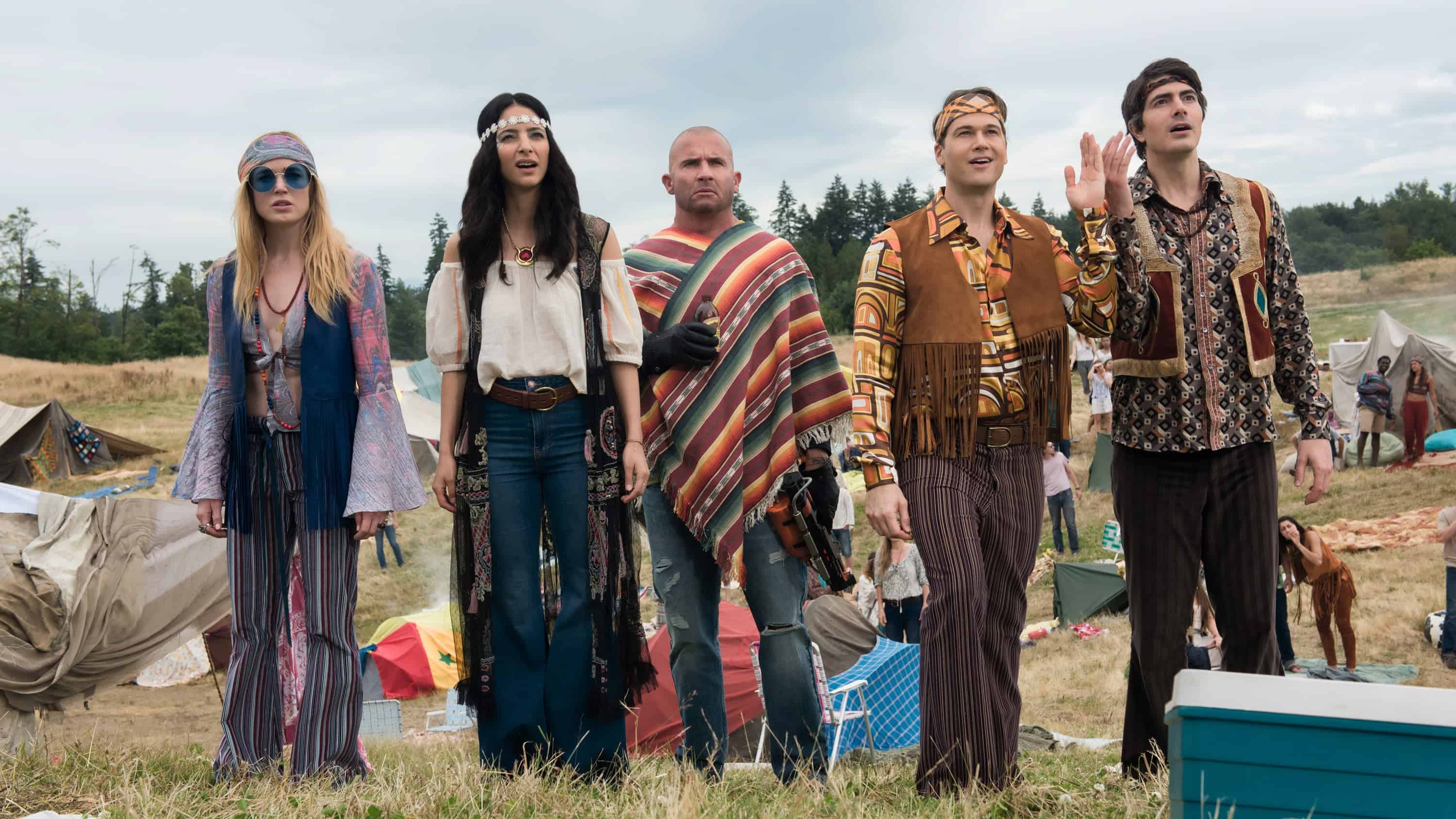 Team Legends is back for a fourth season and it seems that history is still a bit kooky. The team heads to Woodstock in 1969 in this week’s season premiere of Legends of Tomorrow. Oh, there’s also a demon unicorn on the loose who impales people and eats their hearts. Yeah, just when they think they’re out, a supernatural creature pulls them back in. Someone get Constantine on the horn, please! See what I did there?

The hour begins with the Legends going through time fixing anachronism like always. The final one is where Paul Revere appears just as The Beatles were arriving at JFK airport. Nate got to be the one heading back to 1775 and save the Fourth of July much to Ray’s chagrin. Shame they had to knock the real Paul Revere out to prevent him from blabbing about what he had seen.

Repairing anachronisms aside, it seems that there are a couple of relationships in need of fixing. Nate and Mick decided to go on a drunken thieving adventure by stealing something from a wealthy neighborhood. Turns out, the house that they were robbing belongs to Nate’s parents, Dorothy and Henry Heywood. Nate’s Mom seemed nice but it’s clear that Nate did not have a good relationship with his father, who doesn’t approve of his son’s choice of profession as a historian. I guess you can’t really tell your parents that you’re part of a team of heroes who travel through time battling monsters and such. At least Nate decided to mend fences with his father towards the end of the episode by offering to have a heart to heart over a few bottles of beer.

Then there’s the relationship between Sara and Ava. The latter wants the former to live with her and take that next step forward. Sara agreed wholeheartedly but after the demon unicorn fiasco at Woodstock, she worries that Ava might end things with her. I mean, I get that Sara didn’t want Ava and the Time Bureau finding out about magical monsters running amok but the Director managed to find out anyway.

It was revealed that Gary (who also informed Ava about the dragon) told everyone about his missing nipple when the team dispelled the horned horse from Hell with Constantine’s help. That, and Jerry Garcia’s saliva, Janis Joplin’s hair and a virgin. I’m amazed that Ava was not angry about the unicorn and that Sara kept all this from her. She let her love for Sara overtake the negativity. Looks like Avalance is going to be just fine. Hopefully, Sara can trust her girlfriend enough to tell her everything that’s going on instead of trying to hide it from her.

Back to the demon unicorn, seeing the Legends be affected by the glitter goo hallucinogen amuses me greatly. Nate saw Mick as his father while the fire-gun wielding criminal saw the historian as his late pet rat Axl. Ray mistook a tree for Nora Darhk and Zara saw the beauty of Woodstock. The part where everyone was goofing off due to the hallucinogen made me snicker. It must’ve been fun filming that particular scene as they got to channel their inner kid to a certain extent.

In the end, the unicorn is back where it belongs and the world is right again. Oh, wait a minute, no it isn’t! We see an invisible supernatural force attack Constantine at his apartment. Then a message written in blood appeared on the broken mirror. Is Mallus back somehow or is another demonic creature out wreaking havoc? Are you regretting turning down Sara’s offer to join the Legends now, Johnny-boy?

Sara used Zara as a human shield when the unicorn spewed out the glitter goo. How dare you, Captain Lance! On the other hand, if she hadn’t done that, she and Constantine would not have been able to figure out a way to take down the hellish steed.

Gary is still a virgin. Wow. I’m assuming that he’s not a big hit with the ladies?

The part where Constantine uses the bones as divination rods was intriguing. Wonder if he uses it to track down every monster that’s out there?

Sara wearing pink fluffy slippers. Never thought I’d see the day. She is well on her way to becoming a partially kept woman.

Nate and Ray are apparently fans of My Little Pony. Huh. Did not know that.

What did you think of the fourth season opener of Legends of Tomorrow? Was it awesome or was it good but not as good as the trailer made it out to be? Let me know in the comments!