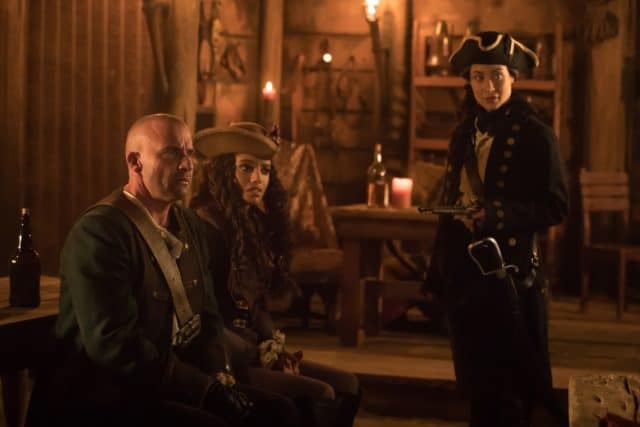 A pirate, a real pirate, doesn’t live for tomorrow. They live in the moment and faces the problems in front of them. Team Legends take on the infamous Blackbeard as they search for the missing Earth Totem on tonight’s Legends of Tomorrow. Sara also takes the night off to go on a date with Agent Sharpe while Rip continues to convince Wally to join the Legends.

When Blackbeard was introduced during the episode, I thought that he would be just like the history version. Ruthless, cunning, and just plain piratey (is that even a word?). Never thought that he would turn out to be a pirate version of Ray (no offence). I mean, aside from his attempts at acting tough, he’s a coward who doesn’t face the issue head-on. To be honest, though I was a bit taken aback by this version of Blackbeard, I quite like him.

Meanwhile, former Waverider captain Rip Hunter decides to have a wild night with Wally. The two got themselves super drunk, and Rip had Kid Flash steal Gary’s time courier and phone as well as the former’s signature brown trench coat. Karma then came back to bite Rip in the butt the next morning when he suffered a massive hangover. Then again, desperate times call for drastic measures. In the end, I have a feeling that he has successfully convinced Wally to join Team Legends. Now it’s just a matter of when the speedster will make it official.

Back to the mission, the team managed to escape the executioner’s axe and found Blackbeard’s treasure on Grace Island. Though before they can get to said treasure, Damien Darhk got there first. Thankfully, the possessed body of Anne, Blackbeard’s paramour, attacked Darhk and his crew while wearing the Earth Totem. Yes, I’m glad that a villain is being attacked by another villain. Even if said latter villain is a menacing, ruthless female pirate risen from the dead thanks to the Earth Totem.

Speaking of Damien Darhk, it’s nice to know that he still has a heart. He traded Amaya’s totem so that Ray can save his daughter after the former shot the latter with the Nanite pistol. It shows that although he is pure evil, he still cares deeply for his little girl. Shame Nora turned on Ray after being healed and briefly sucked the life out of the latter, rendering him unconscious. I wonder what the Darhks will do with him and will Amaya ever get her Totem back?

In other news, Sara tries to have a regular first date with Agent Sharpe. Things started off reasonable enough, but when Gary showed up to speak to Agent Sharpe and Sara seeing the Waverider fall from the sky, it’s anything but. At least the two ladies made up with an intense lip-lock afterward after arguing about who stood up whom.

A piece of advice for Amaya? I get that you want to change Kuasa’s past, but in doing so, you will set off a chain reaction of events that will alter the course of history. Ask Barry, he knows all about it.

Damien Darhk has excellent penmanship for a villain. Kudos.

Also, kudos to Mick for being the Voice of Reason for Amaya in this episode. He told her to be brave and take risks much like a pirate would.

Gideon gaining access to Sara’s phone to tell her about what’s happening with her team? Hilarious. Way to tattle on the rest of the Legends, Gideon!

Loved the scene where Rip and Wally belted out the late George Michael’s Careless Whisper at a Japanese karaoke bar in Tokyo. These two have excellent voices. I smell a record deal. Well, if they choose to go down this route that is.

The scene where Sara and Agent Sharpe took on Blackbeard and his men when the latter came onto the Waverider was awesome. Never mess with ladies who can kick butt!

Who came up with the brilliant idea to park the Waverider in the Bermuda Triangle?! You know what that does to ships and planes! I bet it was Nate since he was the one who pushed the team into going after the Earth Totem.

Legends of Tomorrow Season 3 Episode 12 Review: "The Curse of the Earth Totem"

Sara takes some private time while the rest of Team Legends pursue a lead on the whereabouts of the long-lost Earth Totem and comes face to face with Blackbeard himself. Ray feels guilty about shooting Nora Darhk with the Nanite pistol on tonight’s Legends of Tomorrow.