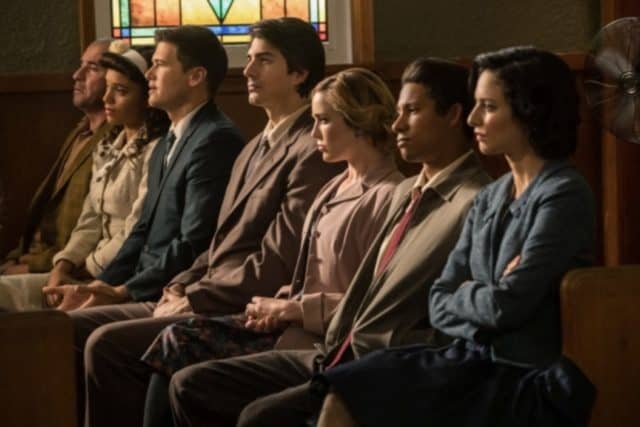 The Legends head to Memphis, the birthplace of Rock and Roll in this week’s episode of Legends of Tomorrow to save music. The team also come face to face with the King himself: Elvis Presley. So without further ado, let’s rock and roll! Sorry, couldn’t resist.

The hour begins with young teenage Elvis entering a music store to purchase his first guitar. The owner showed him a guitar that once belonged to Robert Johnson, who wanted to be a great blues musician. According to legend, Johnson sold his soul to the Devil, and the latter tuned the former’s guitar which made him the most excellent blues musician ever lived. As Elvis played the cursed instrument in the store, all the lights started to flicker. Panicked, the owner said that Elvis could keep the guitar so long as he gets it away from the store.

Meanwhile, on the Waverider, Wally is shown around the ship by Zari. The speedster made himself at home by moving his things into Professor Stein’s old room. He also did the dishes. It’s nice to have a speedster do everything for you, doesn’t it? Zari and Nate, on the other hand, don’t seem to be too thrilled. Yes, it’s annoying at first, but you’ll get used to it after a while. Just don’t ask him to run back in time. You have the Waverider and Gideon for that already.

Back to Elvis, the King played a song during Sunday Service at his church. His uncle Zion preached that Rock and Roll is the Devil’s music. Jazz and the Blues is the Devil’s music, thank you very much! Later, the young man played in a local bar with a fake guitar made by Gideon after Wally took the one with the sixth Totem on it. Does this mean that he will have to join the Legends and help take down Mallus?

The performance did not go well, and when Nate and Amaya posed as music managers, Elvis told them that his guitar connects him to his twin brother Jesse, who passed when he was still an infant. Sara and Ray got a brief glimpse of the other Presley when they were tinkering with the original guitar. The ghost of the latter appeared on the ship after an EMF affected the Waverider’s electrical servers. It might be that Jesse’s spirit is a spiritual representation of the sixth Totem. Though it looked a lot like a Time Wraith than Casper.

In the end, Elvis recorded his first single that started his career. I almost had a heart attack when his Uncle Lucius gave the record to Wally. Thought the reverend was going to break it. Thank goodness he didn’t, or else music would never be the same. Wally, after having a brief heart-to-heart with the good reverend, got the record in time to the local radio station WHBQ and history is saved once again. Well, after Kid Flash and Zari took on the ghosts that entered the church Ms. Pac-Man style. That, and Elvis sending the spirits away with a touching rendition of Amazing Grace.

Nate wanting to find a music moment for him and Amaya. Aww…that’s sweet. He wants them to have a song that’s theirs. Just like B-Squared and Deckerstar. (It turned out to be Amazing Grace)

Elvis trying to come up with a song name while stuck in jail with Nate. Dude, just call it Jailhouse Rock, and we’re good!

Point of Inquiry: How did Sara get in touch with Constantine? Did she call him up to say “Hey, I need your help with something?” or did Gideon help out?

I love how Sara would lead her team into the field with pizazz. Reminds me of how Rip used to do the same when he was in charge.

How could Mick not know who Josh Groban is? On the other hand, he is more of a rock/heavy metal kind of guy (I’m assuming).

Mick shedding a tear at Axl’s funeral. Never thought I’d see that. Also, loved the tender moment between the two of them when Mick fed the other half of the sandwich to his beloved pet.

Unnerving Moment: Death Totem acting up in the middle of the night. Not good.

The Legends learn that a mysterious tragedy turned the birthplace of rock ‘n’ roll into a ghost town. They then embark on a mission to save music, and it leads them to the sixth and final totem, the Death Totem. The King, Elvis Presley, also makes an appearance in this week’s episode of Legends of Tomorrow.