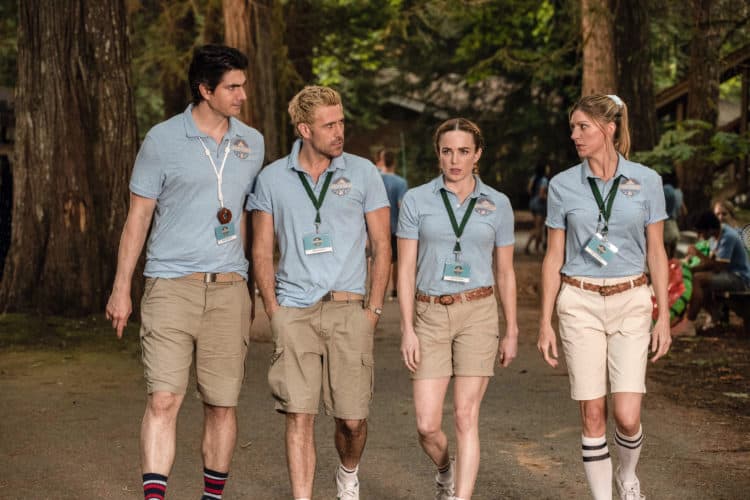 For some, childhood would not be complete without one thing: summer camp. In this week’s episode of Legends of Tomorrow, the team head to Camp Ogawa in Maine, 1995. The mission? To look for the kids that went missing and to track down a Striga, a magical creature that feeds on the life force of children.

I loved Sara’s enthusiasm about going to camp. It’s nice to see her act like a kid again because she deserves to let loose every once in a while. Ava, on the other hand, does not know how to be a kid. Granted, she’s never been one given that she is one out of many clones of herself, but not everything has to be run like a tight ship. It’s summer camp, Ava Sharpe! It’s not a military boot camp! I guess it’s like all the cop dramas out there, a light, cheerful partner with a dark past works with a by-the-books cop and as a result, lightens up their life. See what I did there?

Speaking of Avalance, it’s neat to see them as little girls, albeit it was under a magical influence. Sara got to relive her summer camp days (maybe her sister went too?) and Ava got the chance to learn how to act like a kid instead of her Time Bureau Director self. I felt sorry for Ava when the girls at the camp called her Lake Beast and pranked her with a fake Beast later in the episode. Looks like kids do not respond well to authority as well as they did back then, now do they, Director Sharpe?

Meanwhile, Constantine and Ray search the woods surrounding the camp trying to locate the Striga and to rescue the missing children. They almost came up empty until the Hellblazer used a magical tracking spell to locate the child-eating witch, who isn’t who I thought it was. I pegged Paula to be the Striga since she looked like the witchy type. Guess I was dead wrong about that. It turns out that Chad, the handsome camp counsellor that the Legends met at the beginning, is the life-force-sucking witch. Although I think he’s more of a grown-up/taller version of Gollum from Lord of the Rings.

In the end, the Striga is dead thanks to Sara and Ava. The missing kids are rescued and had their life force put back into them. Constantine had to use some of his own to save a boy named Randall, causing him to faint afterward. The Hellblazer is then brought back to the Waverider to heal up with Gideon’s help. Ray then suggests they ask Nora Darhk for help when Constantine would not accept Gideon’s treatments. It’s an interesting suggestion but what makes him think that she would agree to help? Yes, she owes Ray big for helping her escape from the Time Bureau but has she truly turned over a new leaf because of it? I have myÂ doubts about this but I guess we’ll see when the time comes.

Constantine saying that he won’t wear a costume for the mission. Ends up wearing a camp counsellor uniform.

The “not” jokes made me roll my eyes. Oh, 90’s humor. I get you, but you’re still cheesy. Although I snickered when Chad made the pun after Sara told him that she prefers knives and swords. Ray’s right, it’s hilarious! I’m sure that Caity and Jess were trying very hard not to laugh.

Constantine calling the boys in the cabin “whippersnappers”. Could he BE anymore old? #LOL

Sharpie should be Ava’s new nickname. Never thought I’d hear it from Constantine’s mouth though. Figured Mick would be the one saying it since he’s the one giving people nicknames.

Nate and Gary in charge of the Time Bureau. This I want to see.

When the little girl came up to Ava and told her the story of the Lake Beast, I had a feeling that it’s a prank. Though I do give the Legends props for checking things out because hey, better safe than sorry right?

When Charlie/Amaya pretends to knock herself out and got Zari to disable the forcefield so the former could escape. Yeah, I saw it coming the moment that Zari bent down to see if Charlie’s okay.

Ava thanking Sara for showing her what it’s like to be a kid. Shares a tender kiss as the spell wore off. Be still my Avalance heart!

Did any of you go to summer camp when you were kids? How was it? Would you send your own children there if given the chance? Why or why not? Sound off in the comments along with your thoughts about the episode!