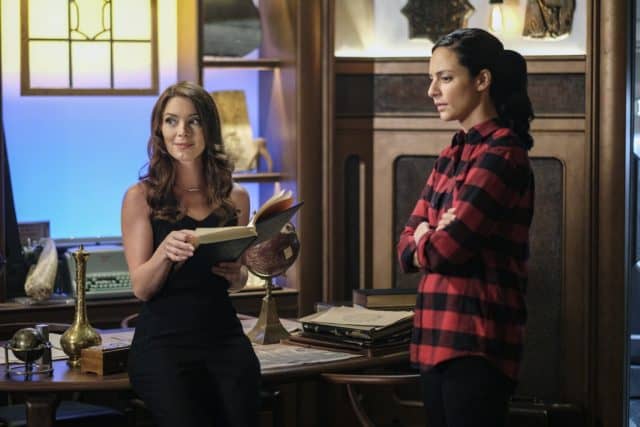 It’s Groundhog Day on tonight’s episode of Legends of Tomorrow. Zari finds herself stuck in a time loop where the Waverider explodes every hour. Therefore, making her relive the same moments over and over again. Where’s Bill Murray when you need him?

I like the overall premise of this episode. Zari often feels like she’s not an actual member of Team Legends and this time loop/Groundhog Day effect is the thing she needs to open her eyes to the truth. That and the shocking twist at the end of the hour almost made me fall out of my seat. It turns out; Gideon orchestrated the whole thing as a test of sorts for Zari to get to know her fellow Legends better and to grow closer to them. Mind. Blown.

The scene where Zari sacrificed herself to save the rest of the Legends made me tear up a bit. Her speech was heartfelt and emotional, and even though I knew that the bomb wouldn’t explode, I still freaked out and hoped that the explosive is a dud. Thank goodness it was because enough people have left the show already. Don’t think my DC fangirl heart can take much more.

AnÂ amusing part of this episode is the fun montage where Zari channels her inner KevinÂ McCallister and gets all Home Alone on the Waverider. It was hilarious to see her try on Nate’s Citizen Steel costume and what I believe is Hawkgirl’s mask. I was surprised to see Zari play the Stradivarius violin so well. Maybe she could duet with a certain consulting detective?

I also loved the parts where we learn about the team’s secrets. Who knew that Mick Rory is secretly an aspiring writer? I find that keeping his typewriter under lock and key is ingenious. I had to keep from laughing when Nate got electrocuted and when he and Zari got blue ink on their faces after opening the box. That’s what you get for snooping!

In the end, Zari is staying on the Waverider as a member of the Legends. Ray also tells Sara that Constantine told him to kill the latter should she be possessed by Mallus again. We also see the escaped Rip Hunter in Yunnan, China where he finally finds Wally West. The former captain and Time Bureau agent told the meditating speedster that he needs his help to save the universe. Perhaps Kid Flash can help Team Legends with their Mallus situation? Either way, I look forward to seeing Wally on the Waverider.

Ray’s working theories about Zari’s time loop experience were hysterical. I don’t think one would go cuckoo after eating too many donuts. Sugar meltdown maybe, but not go insane.

For the last time, it’s groundhog, not hedgehog! Brush up on your movies, Zari Tomaz!

Another LOL moment: When Zari overheard Nate getting it on with Amaya in the library and made a gagging face before saying “Kill me now” as the Waverider explodes.

Zari finds herself trapped in a time loop that results in the Waverider blowing up. She suspects her fellow shipmates’ secrets are the answer in tonight’s Groundhog Day-inspired episode of Legends of Tomorrow.