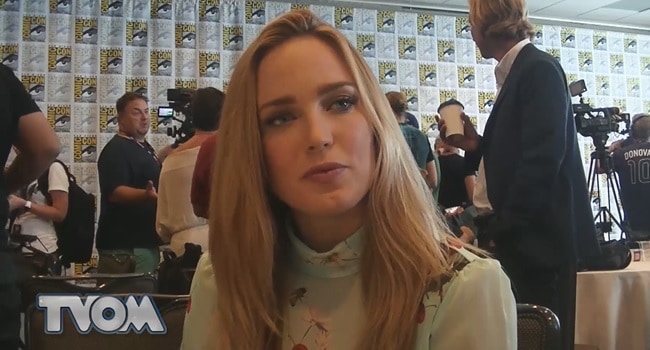 At this year’s San Diego Comic-Con, TV Overmind participated inÂ the Legends of Tomorrow Press Room with several outlets to chat with the cast and crew behind the show to get some insight into what is coming in Season 2. Caity Lotz, who plays Sara Lance a.k.a. the White Canary, was one of the great talents we spoke with as she teased what’s happening in the 2nd season and what’s coming up for our time traveling legends.

-How Sara is going to react to something like the Justice Society of America.

-Whether we’ll be seeing Katie Cassidy on Legends of Tomorrow (this was asked before the big announcement of her new contract) and if Sara will still be dealing with her death.

-The intense fighting scenes and choreography that she works with on the show for her character.

-How Sara would react to seeing an evil version of her dead sister (Earth-2 Laurel Lance, the Black Siren) and who would win in a fight between the two.

–Arrow’s Stephen Amell crashes the interview and asks Lotz a couple of questions regarding Oliver and Sara’s history.