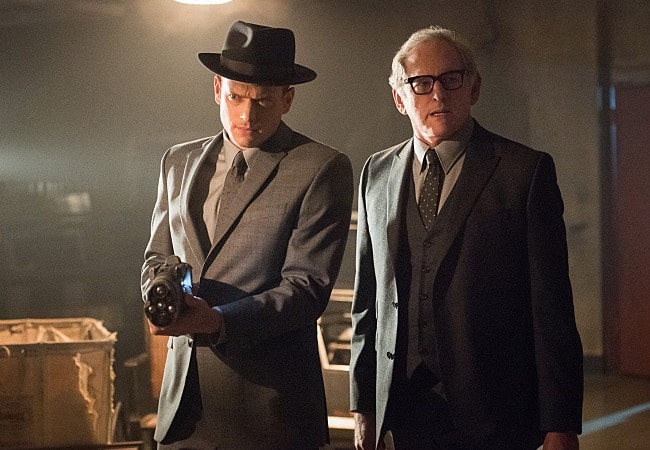 This week’sÂ Legends of TomorrowÂ features our heroes in the 1950’s as they have a dangerous encounter again with Vandal Savage while also having to feelÂ the effects of racism, sexism and views on sexuality that was a big part of the society back then.

I can only guess that this was a conscious nod to Smallville with Vandal going by Curtis Knox as his code name. For those unaware: Dean Cain (Superman from Lois & Clark and Kara’s foster dad on Supergirl) was set to play Vandal Season 7. However, Warner Bros. Pictures changed their minds and the show did a last minute name change which became Curtis Knox that pretty much had all the characteristics and background that Vandal had. Casper Crump continues to be one of the show’s more fun elements in his take of Vandal while also being the intimidating baddie that he is. Even I don’t have a big problem with him mostly just interacting with Kendra due to his backstory with her, I sort of hope they move away from that in the coming weeks.

While we still don’t find out exactly if Heatwave is truly dead or not (spoiler alert: there is no way that he is dead), I did appreciate that Jax spoke and brought up this concern. Speaking of Jax, I have loved him since his debut on The Flash and what Franz Drameh brings to the role. But this character doesn’t get to catch a break at all on this show. I don’t like the fact that he seems to be, in a way or two, the show’s doormat who gets walked over and put in more danger than it is needed. Out of all of them, I feel that Jax keeps being the one character that ends up as the victim the most. It didn’t help either that the most focus he got was in an episode where he was in a time period where someone of his color was discriminated while also ending up as one of Vandal’s weird hawk-monsters. Also, did it feel weird to anyone else how, just before the commercial break, they made a big deal of how tricky it was going to be to restore Jax, but then when they come back, they had just “suddenly” found a cure? It just took away all the stakes and made the consequences very minimal. Even the little love-story between Sara and her nurse friend only had a temporary effect as they had to pretty much wrap it up once their adventures were done for this week. But despite my issues, I enjoyed the horror elements of this week’s episode.

I should have known that we would end on a major cliffhanger, due to the fact that the show is going on a hiatus until the end of the month, but yet the ending was shocking, mostly because three members were left behind. The only issue I have with it was the continuing side-baddie that is Chronos because there isn’t anything intriguing with him. Yes he is big and intimidating, but they haven’t really gone deep with his character in all of his appearances so far. Maybe they’ll begin to flesh him out as we come back in a few weeks because at this point, whenever he shows up in an episode, I don’t expect much of him as a villain. Overall, aside from my hick-ups with how Jax’s presence, this was a solid episode that did a good job with addressing the hard times our society were in over 60 years ago in terms of racism, sexism as well as sexuality. While not mentioning it too much, I’m getting more behind the new romance between Ray and Kendra which has a good flow and natural tone to it. Â Now, if only we could get a Waverider so we could skip these two weeks of hiatus and get to the next episode already.

Legends of TomorrowÂ returns with all new episodes on Thursday, March 31 at 8/7c on The CW.

The team lands in the 1950’s as they have another dangerous encounter with Vandal Savage in this week’s Legends of Tomorrow.