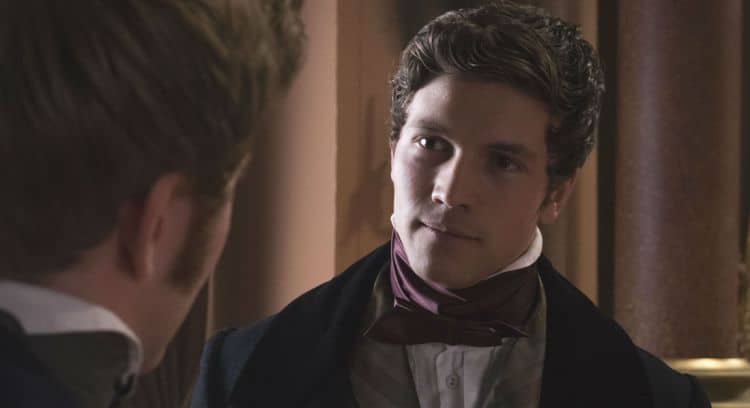 Leo Suter is officially living the life he always dreamed of. With a decade of professional acting experience to his name, Leo has successfully built a solid foundation that he hopes will lead to a legendary career. Although he was born and raised in London, Leo has become more than just a British star. His talent has earned him recognition all over the world. Most people will recognize Leo from his role in shows like Sanditon and Vikings: Valhalla. His fans will also be pleased to know that he has a movie project in the works that is slated to be released sometime in 2021. At this point in his career, I think it’s safe to say that the sky is the limit. Here are 10 things you didn’t know about Leo Suter.

1. He’s Always Been A Fan Of Jane Austen

Being cast in Sanditon wasn’t just a big accomplishment for Leo on a professional level, it was also exciting on a personal level as well. He has always been a fan of Jane Austen’s work, partly thanks to his sister. During an interview with PBS, Leo said, “I have a sister who knows, I think, word for word the Pride and Prejudice film, and takes joy in reciting it. So I’ve been surrounded by Jane Austen and by Andrew Davies adaptations my whole life. I think it’s quite hard not to be a Jane Austen fan in some way, shape, or form.”

2. He Started Acting As A Child

Although most kids dream of what they want to do when they grow up, most of them don’t actually develop a genuine interest in anything until they’re much older. Leo, however, knew that he wanted to act from an early age. He performed in his first play when he was just 11-years-old, and the rest is history.

Why be good at just one thing when you can be good at several? With the level of talent Leo has, that must be his motto. Leo enjoys singing and playing the piano and he also plays the harp. Although it’s clear that he loves music, it doesn’t appear that he is planning on releasing any of his own.

4. He Used To Play Cricket

In addition to acting, Leo is also a big fan of the sport cricket. While talking to Nuit Magazine, Leo said, “I used to love playing cricket, but unfortunately I played too much and developed a stress fracture in my back. That’s stopped me from being able to play seriously…”

5. He Likes Going On Auditions

Many actors would agree that the audition process is one of the most stressful things about the job. As a result, it’s also a lot of people’s least favorite. Leo doesn’t feel that way, though. He actually enjoys going on auditions and he feels that they’re the perfect opportunity to learn more about the role.

Leo has spent the majority of his career doing film and TV work, but that doesn’t mean he isn’t comfortable on stage. In fact, his first acting experiences were in theater. Early in his career, he was even a part of a production of Romeo and Juliet that toured in Tokyo.

From what we can tell, Leo is single and doesn’t have any children but that doesn’t technically mean that he isn’t a father in his own right. He is a proud pet parent. Unfortunately, however, since he isn’t very active on social media, he hasn’t shared too many photos of his dog.

Being in the entertainment industry comes with a lot of perks, but one of the downsides is that celebrities’ privacy is constantly invaded. Despite all of the attention that comes with a career as an actor, Leo has managed to do a good job of protecting his private life.

9. He Wants To Work On Projects He Can Be Proud Of

10. He Loves A Good Adventure

Some people will spend their entire lives doing the same things over and over again, but not Leo. He is the kind of person who is always up for an adventure. He isn’t afraid to try new things and he wants to have as many memorable experiences as he can. This mindset has probably served him well in his acting career.