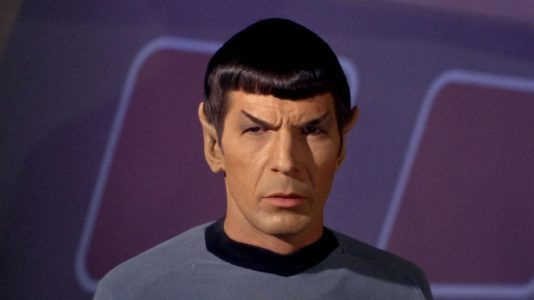 Those that remember The Carol Burnett Show might remember that it was pretty wild and crazy in its own right back in the day. Carol was one of the funniest comedians of her time, to be honest, and was always a great deal of fun to watch since she was always good for a laugh and was, on top of that, quite a good actress that people enjoyed. But it’s a good bet that a lot of people don’t remember when Leonard Nimoy showed up in full Spock regalia at one point after posing as the invisible man in the Mrs. Invisible Man skit. She was almost always known for being out there and extremely funny when she needed to be and her time on TV was something that a lot of people still recall fondly. But mixing a Star Trek character with a comedy show is something that might cause a lot of people to cock their head and give a person a funny look since it’s not something that hasn’t happened before, as SNL and other shows have taken on Star Trek in a comical fashion, but it is something that still gets a reaction. Obviously, there’s a big difference between this show and SNL, but the idea of using Star Trek for a comedic reason is still something that’s shared by a lot of comedy shows. To be realistic, the show kind of gives itself up for this kind of depiction on a comedy show.

To say that Spock has been a favorite character on Star Trek for a long time feels like a gross understatement, but there are plenty of people that would claim that he’s definitely one of them, but that he’s not THE favorite character of the franchise. Amazingly, Captain Picard still takes that title as he has for a while now, as many people still love the captain from The Next Generation that much more since he’s been such an endearing character for so long. But back in the day, when The Carol Burnett Show was at its height, Picard wasn’t around and Spock was definitely still one of the most popular characters on the show. The fact that Nimoy played this character so well and that he was in such high demand blew a lot of people away at first, but after a while, Spock was such a massive superstar that seeing him pretty much anywhere was fun for a lot of people and it might have come as a surprise now and then since it’s hard to tell if that’s a genuine surprise on Carol’s face when she sees Leonard coming from around the bend.

The fact that she’s been such a great comedian and actress for so long makes it difficult to tell just how genuine her shock is since there’s no doubt that there’s a way to tell, but without having watched Burnett for so long it’s not as easy. If he was in fact not expected and she was thinking that someone else would be walking out from the hall then obviously the look she gave would be entirely expected and would have been a big shock to a lot of people. But if she was expecting him then she’s just that good and has been for a long time. Actors showing up on other programs isn’t as big of a deal as it used to be since crossovers aren’t always broadcast in advance, but now and again when they happen it’s a lot of fun since you can’t help but think that one some shows this would be perfectly okay, while on others, like SNL, it’s never been something that was fully allowed since Lorne Michaels has been known to hate surprises for a long time. But still, surprises such as this on various shows have been a lot of fun for the audience since it snaps them out of what they were expecting and into another mindset that might keep them on their toes for the rest of the program. That’s one of the best ways to go about it in show business really, at least from time to time since doing it continuously would be kind of self-defeating given that it’s kind of like a jump scare in a horror movie, once or twice every now and then is great, but relying on a gimmick more than a few times in a short period of time kind of ruins the effect.

TV back in the day was a bit different than it is now, but at the same time, they still knew how to have fun from time to time and how to spring a surprise on people that people didn’t see coming. Spock showing up on The Carol Burnett Show definitely qualified, and it was likely a lot of fun for the audience.