Breaking! Expect news later today that CBS will be announcing at the Television Critics Association summer press tour this morning that the former NBC daytime hit, Let’s Make a Deal!, will be returning to network television this fall. The new edition of Let’s Make a Deal!, produced by Freemantle Television (who also produce the highly popular The Price is Right (with host Drew Carey), will be hosted 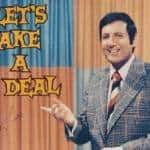 by by Wayne Brady, a former colleague of Carey on Who’s Line Is It Anyway and recent host of Don’t Forget the Lyrics! Let’s Make a Deal! began an long run on network television in 1963 on NBC and moved to ABC in 1968, continuing through 1974. It reappeared on the tube several times over the years since, including a nighttime version on NBC in 2003. Replacing the departing long-running soap opera, Guiding Light, we should be seeing the new version sometime in late September. From the LA Times

The daily one-hour game show on which contestants in kooky costumes trade for hidden prizes is presumably the network’s replacement for its veteran soap opera, which is being pulled off the air after more than a half century because of declining ratings. Network executives are scheduled to make a formal announcement today at the Television Critics Assn. summer press tour in Pasadena. “Let’s Make a Deal’s” original host, Monty Hall, the person most associated with the show’s success since its debut on NBC in December 1963, will be there to hand over the hosting torch to entertainer Wayne Brady. “I’m very, very excited,” Hall said over the weekend. “The show has all kinds of staying power. I have fan mail still coming it from people saying, ‘I miss the show.’ ” CBS is banking on the game show’s nostalgic value to attract viewers. But of even greater importance is the bottom line. The game show will cost much less to produce than a soap opera, for which producers and writers turn out five hour-long episodes a week for an ensemble of performers Nancy Tellem, president of CBS Paramount Network Television Entertainment Group, said in April that the network wanted to find a show for the “Guiding Light” slot “which could have the potential to grow, and we could do it at a much lower cost.” The new “Deal” will be basically the same as the old “Deal.” Contestants buy, sell, or trade for hidden prizes, which could be anything from major appliances to a “zonk” — a worthless item such as a bale of hay. The conclusion of each episode revolves around a trade for “The Big Deal,” which could range from a new car to large cash prizes.

How this affects a proposed new daytime version of a new $100,000 Pyramid, produced by Michael Davies, is uncertain.