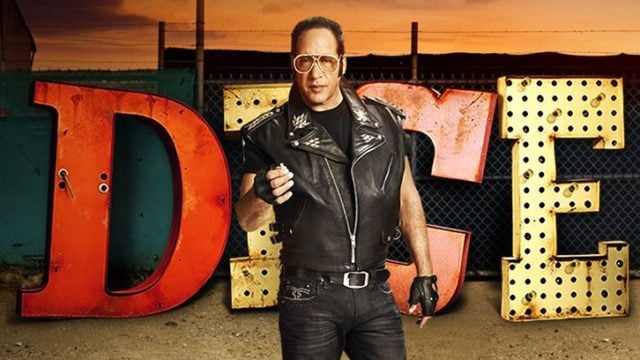 So Dice is rolling again. Yes, the pun was intended no matter how horrible it was. As of last night Andrew Dice Clay’s semi-autobiographical show Dice is back on the air and ready to let the aging star do his own thing yet again. Â What that thing is seems to be another ode to his already faded and almost forgotten career. At one time in film and TV history Clay was a star that a lot of people would have stood by, but now he seems to be a man trying to keep his grip on the edge of stardom so that he won’t fade off into obscurity like he almost did throughout the last decade.

In his younger years Clay was a respected comedian despite the fact that his mouth tends to run away from him quite often. He’s made it known loud and clear quite often that he doesn’t really care what people think and is going to say what he wants to say. That’s great and all, it shows a lot of confidence and a take no prisoners kind of attitude that is needed in show business sometimes. But it can also be kind of limiting if that’s your entire act. Throughout the years Clay hasn’t done much else except be himself, and some of have lauded him for it. Others however have not been as kind, and are not really looking forward to the second season of a show that seems to celebrate a man that made a career out of rubbing people the wrong way.

It takes a certain type of person to really follow Andrew Dice Clay and think he makes that much sense. Even in his advancing years he doesn’t seem to take into consideration that his words could really offend people. I can give him one thing, he’s definitely calmed down in his old age, but only a slight bit. He’s still the same Andrew Dice Clay that was kind of a jerk back in the day but now he’s older, doesn’t move as quickly, and is a lot crankier. Back in the 80’s and 90’s his words were a whip crack in the mouth to society as he laid it down for people in his own usual style. It didn’t matter to him who was listening and what they thought, he was going to say it.

Despite scathing rebukes and horrible reviews and even the tone of this article, that’s at least somewhat impressive. It’s still too difficult to really get behind Clay and say “okay, he’s good” but it’s interesting enough that he stuck to his guns and didn’t bow down to most people. He got out there and did what he wanted to do. And even if it was deplorable at times, which it was, and still will be, he’s still going to be himself and not anyone else.

The flak he’s taken and the criticism he’s going to keep on taking for being who he is won’t be likely to stop, but one thing Clay has proven over the years is that he can take it. The question is can the crowd take it when he dishes it back?