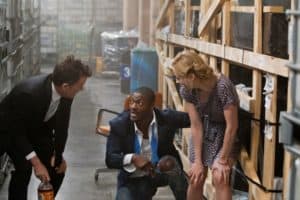 The fate of TNT drama Leverage is currently up in the air. Â At this time, even the show’s creator and producers don’t know whether the series will be picked up for a sixth season. Â Because of this, the season 5 finale (airing on Christmas Day) will also act as a series finale if the show is not renewed. Â Executive producer and directorÂ Dean Devlin has addressed fans in an open letter.

As of the writing of this letter, we still do not know if there will be a season six of our show.Â  Just as we didn’t know when we created the last three episodes which are about to air.Â  Because of this uncertainty, John Rogers and I decided to end this season with the episode we had planned to make to end the series, way back when we shot the pilot.Â  So, the episode that will air on Christmas is, in fact, the series finale we had always envisioned.

This is not to say we would not do a season six should we get the opportunity. Everyone involved with the show, from the cast, the crew, the writers and producers, would like nothing more than to continue telling these stories.Â  But, in case we do not get that opportunity we felt that, creatively, after 77 episodes, we owed it to you, our fans, to end the show properly.

I sincerely hope you watch these last three episodes.Â  They build to our conclusion.Â  And the finale, I believe, is the most powerful episode we’ve ever done.

From all of us who make the show, thank you for watching, supporting and encouraging us.Â  I’ve never experienced a fandom as intense, loyal and wonderful as you all.