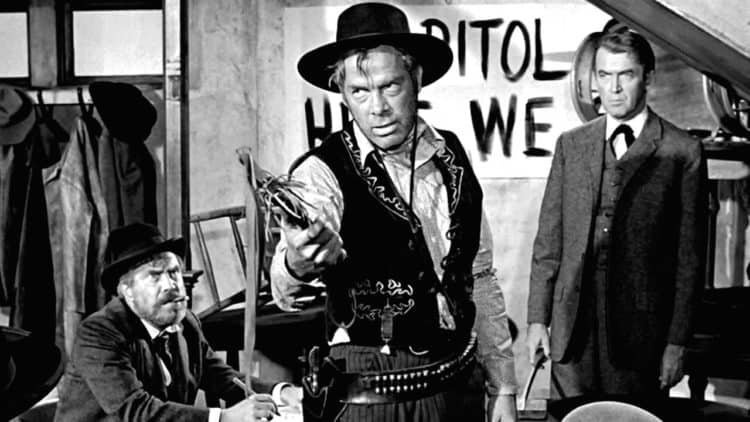 Of his record four Academy Awards for Best Director, not a one was won for the genre he unmistakably revolutionized. John Ford was the wunderkind of the Western, and according to the man himself, he made his last great one in 1962. The Man Who Shot Liberty Valance is a masterwork retaining wall in a career bathed in genius and serves as Fordâ€™s final collaboration with John Wayne as The Cowboy he helped to craft. More importantly, the film provides the soundtrack for Fordâ€™s Western swansong while illuminating the death of the west itself as a â€œdeeply personal farewell to a period in American history he loved, a folklore he helped createâ€ (Hunter).

â€œItâ€™s his last word on the westâ€ says Peter Bogdanovich, Ford protÃ©gÃ© and a legendary director in his own right. The Man Who Shot Liberty Valance is a film steeped in the dealings of honor, cowardice, love, and integrity while simultaneously illustrating the advancement of society, both actual and cinematic. It is also â€œa haunted film. Haunted by the past, says critic Richard Schickelâ€ (Schoenberger). This past is one that Ford generated as truth, and is now slipping into legend. The underlying theme of Liberty Valance is progress as America and represents the classic example of â€œthe successive stages of western development from a wilderness into a gardenâ€ (Belton).

Progress is the American heartbeat and perhaps no film genre is a better vehicle for that reality than the Western. In Liberty Valance, this sentiment is summed up neatly approximately nine minutes into the picture. Hallie, who is played by the â€œconsistently effectiveâ€ (Variety) Vera Miles, sits in a bare buckboard on a familiar street looking around her somehow foreign hometown. She looks upon the town of Shinbone for the first time in 25 years, comprehending that â€œalmost no traces of the old Shinbone can be foundâ€ (Hunter). Emanating an expression that longs for yesteryear, the camera cuts to a medium shot as she remarks, â€œThe place has sure changedâ€. As a slow zoom is initiated to indicate a moment of nostalgic reflection, former Marshal Link Appleyard (seated next to Hallie) responds, â€œThe railroad done that. Desertâ€™s still the sameâ€. The mise-en-scÃ¨ne is used beautifully in this scene providing a dynamic contrast in period costume from the well-dressed Hallie, who made it out of Shinbone and thus representing progress, and the shabbily dressed Link who remained in the town, the unchanged â€œLinkâ€ to the old days. By showing Linkâ€™s plight, progress is shown as a necessary agent of destruction for the frontier while reminding the audience to not â€œforget the people â€˜progressâ€™ plows right overâ€ (Soderberg).

The most notable element of the mise-en-scÃ¨ne in this sequence is the train whistle that howls in the background. This is a classic element of the Western genre encompassing â€œthe Westernâ€™s ambivalent attitude toward progress in general and toward trains in particularâ€ (Belton). This scene encapsulates the essence of the â€œnew(er) westâ€ (Belton) replacing the â€œold(er) westâ€ (Belton). Hallie and Link then abscond in the horse drawn buckboard en route to a location outside of town. A cut to a long shot of the now cosmopolitan Shinbone main street envelopes the screen where elements of Fordâ€™s exceptional mastery of the mise-en-scÃ¨ne once again emphasize that this old west town has fallen victim to America as progress by showing concrete sidewalks and telephone poles. The long shot fades out just as the two principles pass under the power lines that now hang over the townâ€™s main thoroughfare.

As the title suggests, Fordâ€™s masterpiece is a film that deals with life and death but the infamous â€œshootingâ€ does not enter into the equation. The frontier is the victim with the film acting as a chronicle of progress providing the death nail. The result is a â€œsad but inevitable transition from an old social order to modern society as we know it todayâ€ (Hunter). The tragedy, translated by Ford through Hallie, is that the instrument of progress is also inevitably the victim of it.

At the time of filming Liberty Valance, John Ford was 67 years old; he had been making movies in Hollywood for 45 years. After a career beginning in 1917 that helped established the very foundation of the cinematic industry, Ford recognized the shifting winds of the mass predilection. By 1962, as Fordâ€™s own horizon becomes imminently more valid, he delivers his final brilliant work. The Man Who Shot Liberty Valance â€œis unmistakably the director’s final statement on the West. In it, Ford gives us a capsule version of the world it took him 40 years to create, and then shows us how it diedâ€ (Hunter). The most oft quote from the picture is â€œThis is the West, sir. When the legend becomes fact, print the legend.” That is the line that fans recall but what should be remembered is that the West now only exists in legend as â€œFord bitterly laments the intrusion of reality on his legendâ€ (Hunter). At the filmâ€™s conclusion aboard the train out of town, prideful Hallie states “This country used to be a wilderness. Now it’s a garden.â€ Hallie is certainly proud that her hometown has been developed from a wilderness into a garden but somewhere in her heart, like Ford, she is happy that not everything of her roots has been enveloped by progress. Desertâ€™s still the same.