Home
Castle
Life After Cancellation: Where to Find Your Castle Favorites 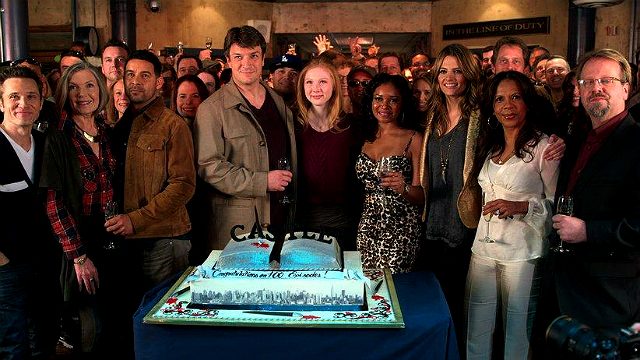 Even though most viewers were relieved that ABC cancelled Castle, it doesn’t mean they don’t miss all the people who were involved with the show. Â After all the characters – and thus the actors – Â have been a part of their lives for years. As the entertainment industry gears up for its 2016-17 season – without Castle – Â here’s where you can find some of yourÂ Castle favorites.

This guy certainly hasn’t let any grass grow under his feet! Â He and pal Alan Tudyk were already in play for a season 2 of their successful web series Con Man.

Most recently, the two were at San Diego Comic Con promoting the series. Â You can watch one of their SDCC interviews about season 2 here.

Fillion will also be appearing on ABC’s Modern Family! Deadline reports that his recurringÂ role is that of aÂ local weatherman named “Rainor ShineÂ (as inÂ rain or shine).” Â  who becomes involved with the Dunphy family.Â Â Comedy is a Fillion strength, so we know this is a great fit!

The actress has been keeping things low-key and out of the spotlight. Â However, she has been posting fun and beautiful pictures on her Instagram while spending time in places like New York City and overseas in Belgrade, Serbia. (Check out her photos of this stunning city!) Â Considering that she’s got three indie films coming out this fall, taking this much-needed break is not just fun, it’s practical.

As for when exactly these movies come out, this is what’s known thus far:

Oh, and just in case you’re going to be hanging out in NYC on September 26th, you should try to grab tickets for White Rabbit Red Rabbit. Â This internationally acclaimed play is making its New York debut and Katic is doing it on the 26th! When you read the unique and unusual concept of this play and the list of people who’ve done it, you’ll realize just how awesome a thing this is!

A different performer each night is handed the script for the first time as they step onto the stage. Â (read more atÂ Broadwaywayworld.com)

I’m sure we’ll all be missing Kate Beckett in September – but we’ll certainly be seeing a lot of Stana Katic!

While Fillion will be on ABC,Â Huertas can be seen in a recurring role on NBC’s new dramedy series This is Us. Â Here’s the basic setup:

Starring Mandy Moore, Milo Ventimiglia and Sterling K. Brown, This Is Us follows an ensemble – some of them sharing the same birthday – whose life stories intertwine in curious ways.

Huertas also has tweeted that he’s going to be a guest star on CBS’s Elementary -Â and that role’s in the show’s second episode of the upcoming season!

But, wait, there’s more! Like Katic, Huertas has an independent film coming up for general release. Reparations has been winning awards on the indie circuit since it came out last year. Â Now, this September it’s coming to a select theatre near you!

Although Dever isn’t yet said to be on any fall shows, you can find him and his wifeÂ Juliana DeverÂ Â in what has to be the coolest ads on YouTube ever! Â (She also played his wife Jenny on the show!) They are in a mini-series of web episodes that use virtual reality. Â It’s a little like Google Earth, but with video instead of photos. You can see the first of their four videos here.

Viewers were sad that she wasn’t a physical part of Castle season 8. Â However, Â the new showrunners did have the wherewithal to have her character promoted down to 1PP. Â Beckett often had to head “downtown” to meet with Victoria Gates.

What’s her next project?Â DeadlineÂ has reported thatÂ Jerald is starring in a TV movie called Media. Â The movie is forÂ the cable and satellite network TV One, and it very well may turn into a TV series!Â  Jerald’sÂ character is, ” the matriarch of a black family with a media empire called JUMP: Jones Universal Media Productions.” Â Look out, Cookie Lyons!

While you may not see much of Quinn this fall, you will likely be hearing about her. She’s got two cool films slated to come out in 2017! Â The first isÂ Newly Single is the second feature from indie directorÂ Adam Christian Clark.Â  Â Then there’s The Last Rampage: “A film based on the true story of murderer Gary Tison’s attempted escape from prison to Mexico. ”

He was the forever beloved Captain Montgomery who sacrificed his life for Beckett’s – Â to redeem himself for past sins. Â Santiago-Hudson has been a busy man since! Â A regular in the New York theatre world he’s also been on a ton of TV shows. The latest is Â Billions. Â Â That’s on Showtime andÂ he started it in the later half of season 1. Â Season 2 comes in 2017. Â There’s also a new show for BET called The Yard to keep an eye out for.

Earlier this summer Ms. Sullivan was doing the play Steel Magnolia’s. Â Both of these longtimeÂ Castle favoritesÂ had extensive resumes before this show. Â I’ve no doubt we’ll soon be hearing more about their next endeavors!

Maya StojanÂ played the tech girl Tory Ellis in seasons 6 and 7. Â She can be seen in the TV movieÂ Diagnosis Delicious.

Arye GrossÂ had the role ofÂ the ever-so-strange medical examinerÂ Sidney Perlmutter. Â He’s in the quirky indie comedyÂ Diani & Devine Meet the Apocalypse. Â That film is having its world premiere this October at the Austin Film Festival!

Sunkrish Bala was brought in for Castle season 8 as Beckett’s new sidekickÂ Vikram Singh. Â  In June he was “Chee” in the indie comedy Chee and T Â – whichÂ premiered at the L.A. Film Festival!Â  This fall Â he’s in a couple of things. Â  He has a r0le in a feature calledÂ The Thinning. Â According toÂ DeadlineÂ this has been picked up by the streaming service Youtube Red for fall 2016.Â Â He’s also doing a web series called Couch People.Â

Scott PaulinÂ portrayedÂ the loved and highly underused character of Jim Beckett. Â He was set to be in the Albert Pyun film Napoleon. Â Unfortunately, that project is on hold due to the director’s illness.

Toks OlagundoyeÂ was brought in for Castle season 8 Â as a series regular as Hayley Shipton – aka Alexis Castle’s new best friend. Â There’s no news on her yet, but, like Sullivan and Jones, I’m sure we’ll be hearing about this talented actress soon!

Okay, I’ve really saved the best for last. Â CastleÂ creator Andrew MarloweÂ and his wife –Â writer, executive producer,Â as well aÂ Â his self-proclaimed muse,Â Terri Edda Miller – are doing another show together. Â  It’s called Take Two. (That name, for so many reasons, is so brilliant!)

Take Two is being done as a partnership between MilMar Pictures (which, if you didn’t guess, is Marlowe & Miller’s production company) and Tandem Productions. Â Â Right off the bat what I love is that this is a full-on acknowledged creation of Marlowe and Miller. Â Â Marlowe is the sole creator of Castle.Â  Â However, interviews like this one from The TV Addict do give viewers the sense that the show’s subsequent development was a two-person enterprise. Â Â Certainly the best Caskett episodes – like Always and The Lives of Others have come out of their collaborations. Â  Fans haveÂ always believed Â that the Castle and Beckett relationship was in part derived from their writing partnership.

Now withÂ Take TwoÂ Marlowe and Miller are listed as being in together from the beginning. Â  Â To me, this means viewers can expect romance and hijinksÂ of the highest order! Â The story synopsis from The Hollywood Reporter absolutely fits that bill:

Take Two is a comedy crime procedural in the Castle mode, featuring a mismatched pair that solves cases. Eddie Valetik is an L.A. private investigator who hires Emma Swift, the former star of a hit cop show, now fresh out of rehab, to appear in late-night TV spots for his PI business. When the ads go out, a flood of offers come in, all wanting to hire Emma. Reluctantly, Eddie teams up with the actress, who draws on the plots of her former TV series to help solve their cases.

What else is different aboutÂ Take Two?Â  The show is being made for international distribution. Â In numerous interviewsÂ Marlowe talks about the fact that in the U.S. the major networks are trying to be like cable and abandoning the “more traditional” procedural-time shows. Â However, those are the shows that do well overseas – as well as being popular here in the U.S. (NCIS. Need I say more?). Â You can hear more about this, and the show’s premise, in a Marlowe and Miller video interview with Worldscreen.com

It’s fair to say that although the showÂ has ended its run, the CastleÂ favorites that have made the show successful are going to be around to entertain the rest of us for a long time! Â I’m definitely looking forward to seeing everyone’s new endeavours. Â I have to admit that the thing I’m the most curious about is Take Two. Â As it stands the show seems more engaging than most of the new shows the networks have announced for this fall. Â Let’s hope that it’s picked up domestically and not just overseas!