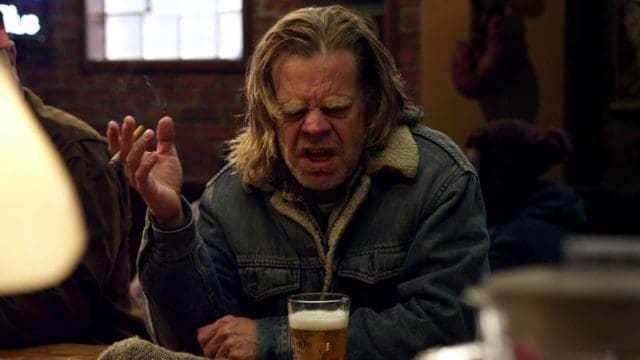 When the American version of the popular British show Shameless, came on the scene, viewers were treated to a comedy that showed the real side of life. Shameless used humor to depict the brutal downside of existence for kids cursed with an actively alcoholic parent, thanks to their hopelessly drunk and dishonest father, Frank. Frank, played by veteran actor William H. Macy, is actually a complex character. Deep down he loves his family but often won’t raise a finger to help them. In fact, Frank is often the cause of conflict and heartache for the Gallaghers. The children of Frank and his absent mentally ill ex-wife, Monica are stuck trying to get by the best way they can, headed by oldest daughter Fiona who has custody of her younger siblings. Frank’s antics can be viewed as pure comedic camp, but look deeper and you will find that there are some interesting life lessons to be learned form Frank Gallagher of Shameless.

5. You Earn Your Kid’s Respect (or Disrespect)

As the opening theme “The Luck You Got” opens each episode of Shameless, you see Frank passed out on the floor in the bathroom. Fiona, well used to finding him in this condition, kicks him a couple of times before dragging him out by the heels so that the family can resume their normal routine. They call him “Frank” not “Dad” or “Daddy”.

4. Your Bar Buddies Are Not Your Friends

Aside from a little help now and then from Kevin the bartender, the patrons of The Alibi Room are more than happy to just sit by and watch Frank self-destruct. They will, however, be nice to him if he is buying a round on the few occasions when he is flush.

3. Anyone Can Get a Girlfriend

Despite the fact that his face looks like a worn carpet and he often needs a bath, Frank sometimes scores! Sheila Jackson, in particular, for all of her quirks was actually a nice woman living in a nice home and she voluntarily let Frank into her life with the hopes that she could change him. Fat chance! Frank attracts more than his share of ladies willing to sleep with the mess that he is.

2. When You Neglect Your Kids Bad Stuff Happens

Yes, Fiona could be relied upon to always take up the slack, but just once she tried being carefree and irresponsible and the whole house of cards fell apart. A bag of coke was left behind by an ex-boyfriend and she, Kevin, and Val did some birthday partying, only to find that baby Liam had got into the stash and almost died. The child was okay in the end and Fiona went to prison. Frank seemed to sail through all of this unscathed and Fiona paid the price. Had she been allowed to do anything but go to work and take care of the kids this probably would not have happened. When parents expect their kids to grow up too soon they will rebel, sometimes with terrible consequences.

1. God Really Does Look Out for Drunks (On TV At Least)

So many times Frank should have died, almost died, was thought to be dead, but like a bad penny he always turns up. He even got a liver transplant. Frank is like a mangy cat who always seems to land on his feet. In real life anyone who pressed his luck that far would have been pushing up daisies for sure, but on Shameless, Frank seems to abuse his body with abandon with no lasting consequences of his own.