I came into Lights Out a little caustiously last night. Most sports dramas I have watched either focus to much on the sport or to much on one main character. I thought maybe Lights Out would have followed that same procedure but instead, it punched its way past normal sports television and seperated itself from it. The first hour of Lights Out has already proven that it can go toe to toe with other dramas on cable and even on basic networks.

The characters of the show seem fresh. Patrick “Lights” Leary (Holt McCallany) is not the typical retired boxer. For awhile we get a sense that he doesn’t miss the sport but we can see throughout the pilot, Lights is struggling to break free from normalcy and from this, he will pick a fight just so he can live in his lifestyle a little while longer. Theresa Leary (Catherine McCormack) is the woman behind Lights. From the first scene we she that she is the reason that Lights is done with boxing. She enjoys the life she now has with her husband, but something tells me that once the money runs out, so will Theresa. Johnny Leary (Pablo Schreiber) is Lights’ brother and co owner of the gym. We first see Johnny as the ring medic on Lights’ side but his role drastically changes in the future as he is the one controlling the money and deals sent along to Lights. Finally Robert “Pops” Leary (Stacy Keach) is the father of the Leary bros. and was once the coach of Lights. Pops now resides as a gym trainer as Lights’/Johnnys gym. We the viewers can see that there is some riffs between Pops and Lights, mostly for money, and who knows where this may take the father and son.

In terms of substance, Lights Out garnered my attention for the whole hour. From the first bell to the final punch, I was hooked by not only the characters, but the story that unfolded. I enjoyed the way that Lights Out did not just show us the big fight outright, but instead lead us through the journey of Lights as he remembers bits of the fight. While we don’t have a clear vision yet of why Richard “Death Row” Reynolds (Billy Brown) actually won the bout with Lights, we get the sense that this one fight changed both mens history forever. From brain damage on Lights, to what is percieved as great fame for Death Row, both men are not the same as they were 5 years ago.

I have to say, my one favorite moment from the episode came right near the end. Throughout the episode, we were shown different conversations Lights had with other people (his daughter, the man trying to broker a deal with him, and a drunk antagonist at a bar). We were shown what was to be believed as the happy endings of these conversations, 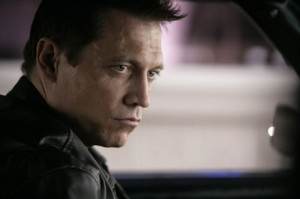 but in actuality, they ended much more violently (expect for the conversation with his child). The writers did a nice job of placing the violence between Lights and the men who hassled him, with the quiet sincere talk Lights had with his youngest daughter. We get a sense from this that Lights wishes to live in both worlds where he can hold onto his family and also box for a living.

With a great story already unfolding, Lights Out is sure to deliver the knock-out punch needed to land viewers this season. One can only hope, that it can last the 13 rounds of episodes the show has planned. A-

Disagree with the review, wish somethings were different about Lights Out, or just want to talk praises? Leave your comments in the section below or in our Lights Out discussion board.