Another year older, another year wiser. This old adage is usually coupled with a birthday but, this weeks episode of Lights Out proves that this isn’t just true for birthdays. While Lights was able to celebrate a nice family birthday, little did he know of the turmoil that would be coming his way in the future.

I got really excited this week when Death Row showed up at Lights’ house. Granted it was a brief appearance this week and it was only to gloat to Lights about his success but, I fell like this one meeting gave us the viewers a glimpse into what can become of the upcoming fight between the two. As re-said by Lights in the previous scene “I won the fight”, we know that Death Row has a very different view of what has happened. My only wish in the next couple of weeks is that we the viewers can see what actually happened at the end of the Death Row/Lights fight. It will be nice to see how the downfall of Lights began.

This week was really more of a focus on a “hero” other than Lights. Omar the Armenien (Pedro Pascal) is the man who will bring the gym back to its former glory. Well at least he was the man who was supposed to do that. His cocky attitude, disrespect for his trainers, and his ability to 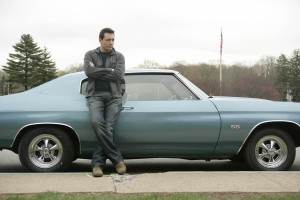 shortcut his way to a PPV fight made him a prime canidate to be quite a failure and in the end, thats what he became. I, for some odd reason, thought Omar was going to win the fight as he got to the point of almost K.O.ing his opponent in the 10th round. However, a win here would have solved many problems for the gym, Omar’s career, and even the life of Lights. I enjoyed the quick twist added to the fight as Omars cockiness overcame his fighting training and he ended up losing the fight. It will certainly make for some great television in the next episodes as Johnny had placed some serrious money of the fight (I hope you all saw that in the preview).

This week gave me one of the best moments I have seen in the past 3 episodes. During training, Lights took it upon himself to get Omar into the best position as a fighter. The scene in which Lights brings the young fighter into a back room and flicks off the lights was genius. The raw emotion brought by Lights as he told Omar that what he has in this room is all he will have in the ring was some great wisdom for life itself let alone boxing. It’s too bad that Omar did not heed these words once he was placed into the ring.

After last weeks episode, this episode can place itself right on a pedistel as a tie. While the episode provided great dialougue between characters and a tidal wave of trouble on the horizon for Lights and his family, the episode did not falter or gain enough footing to be placed into a different class. A

Agree or Disagree with the review? Want to just talk more about the episode? Be sure to sound off in our comment section below.