Money will make a man do something’s he isn’t proud of. We learn that first hand this week as Lights and his family begin to contemplate things to change their lives and safe money. Ultimately however, it comes down to Lights jumping back in the ring. Let’s just say this decision won’t sit well will many members of the family.

This week was all about the Leary’s getting their family back on the right side of money. It all started with the Leary’s talking with an accountant about their money. The scene itself shows a new side of Lights. His stubbornness during the meeting sort of gave Lights the look of a young child. We all know that he really wants to get back into the ring but, he doesn’t want anyone else to change their life to better the family. Theresa of course plays the worried wife and at one point talks about giving up her own dreams. I have a feeling though that if these talks continue, Lights and Theresa’s money problem may be the least of their worries. This becomes a big realization as Theresa can’t even bring herself to tell her husband she loves him.

Speaking of getting into the ring, Lights began his training this week. Thankfully, Lights is going to stick with boxing as last week showed us MMA is not the sport for boxers to take up. While I was really hoping that Lights would jump right into the fight against Death Row, I realized it was fine for me to settle on just a fight 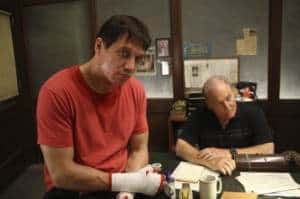 between Lights and just some other boxer. Thing is, I didn’t even get that. I have to say that for a show based on boxing, they show very little about boxing. But, that is fine at this point of the series as now is all about the comeback. Lights Out is starting to show that it’s less about boxing and more about the struggles of life after ending a sports career.

One thing that caught my attention was the character of Barry Word (Reg E. Cathey). As a boxing promoter, Barry has major say in what happens to a boxer’s career and what doesn’t happen. In Lights’eyes, he is just a man who only wants the money. This is seen this week manifesting in larger ways that the past episodes. We find out this week that Barry now holds the next three fights for Lights in his hands thanks to Johnny’s betting on the Omar fight. Barry seems to have turned a new page in villainy as he has not only forced Lights to fight Javier ‘El Diablo’Morales (Gavin-Keith Umeh) but, to ensure Lights can’t back out, it seems Barry intentionally broke JoJo’s hands. It will be interesting to see where the writers take the character of Barry.

With little action this week, Lights Out slumps a little in the ring but, it’s able to make up for it with the great character development and progression of story. Now, let’s hope that Lights Out can hold this pace for a whole season. B+