Oh boy was this week a big week for the Leary’s and the viewers of Lights Out. It seemed that Lights Out was pushing things along to fast at first but, by the end of the episode, everything evened out and made for a great resolving finish. The question is did Lights Out entertain for the full 60 rounds (minutes) or did it dance around for a while? Well lace up those gloves, step into the ring, and read on to find out the answer. 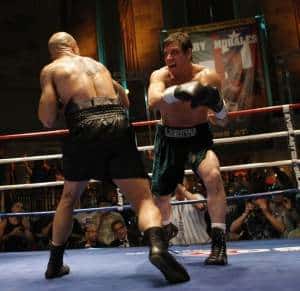 The very first scene this week made me squeal as we finally got to see a boxing match. While we at first were only given the introductions by the ringmaster, I knew that LO would not disappoint this week. This is where our main story this week jumped off as well. The episode back tracked from here to show us the final days before the Lights vs. El Diablo match that has been teased for the past 3 episodes. Lights is still fighting against his eye injury, so naturally the fuzzy camera trick was back again this week. I can express how much I am annoyed by this and how much it really screws up my vision during the rest of the episode. Hopefully Lights gets better soon as this problem may cause viewers to avoid watching.

The training that Lights has gone through the past weeks has been amplified as he nears the match date and Pops is making sure that his boy is in peak fighting shape. While I am all for being the best you can be at all times, Pops really irked me as it is becoming more evident that he not only wants Lights to become world champ again but, he is in some aspects living his youthful dreams through Lights. Pops pushes Lights harder and harder as days go by and at one point almost causes Lights to pass out. I was glad to see Johnny return to stick up for his brother and stand up to Pops. Even after watching Lights win against El Diablo, Pops wants to push Lights through at least 5 more grueling matches before the great rematch against Death Row. While this actually seems like a great idea (one fight doesn’t automatically say you are back in prime form), Lights will have none of this and in turn drops Pops as his trainer. I never have had a feeling of distaste for Lights until this moment as it shows, he is becoming more selfish with is life and career. With Pops now out of the picture, it will be interesting to see how he maintains an integral part of the show.

While the fight may have been the main story this week, we the viewers were given a glimmer of hope for the Leary family this week. I have already mentioned Johnny coming back to help Lights but, a more important moment for the Leary’s is that it seems everyone is coming back together. Lights and Theresa have, for now, reconciled their differences and became re-united before the fight, thus giving Lights his good luck charm back. I enjoyed seeing the couple come back together but, a part of me believes that this happy feeling between the family won’t last very long. With Lights aiming towards different training methods in the future, it’s only a matter of time before something (perhaps injury) or someone (could be Johnny with money, Brennen with his illegal practices, or Word with his conniving ways) tears the fabric of the Leary family apart.

This episode gave the viewer’s things that I thought we would only get in the final minutes of the season. While it may be harmful to throw Lights back into a happy lifestyle, this week’s episode was in no way harmful to the series. A+