One man can change the course of everyone’s lives. I believe that should be the tag line of Ed Romeo. Not only has this man changed the way Lights has trained, he has brought happiness to the Leary children, dissention with Johnny, and anger with Death Row. After this week’s episode, he not only changed the characters view of him but, my view as well. Does the new view of Romeo help this episode or does it knock it out in the first round? Grab your scissors and read on to find out.

This week was all one giant story to me but I figure it’s best to break it down in terms of people. What better place to start than the relationship between Romeo and all the Leary’s. With Lights getting pushed harder and harder during training, Romeo begins to pull moves that cost the family. When Lights missed his first PR meeting at 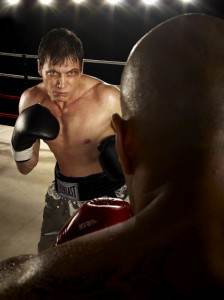 Coney Island, I first had ill thoughts toward Romeo. After all it cost Lights to lose a chunk of change and it put Johnny in a legal bind. However, as the episode progressed, I grew fond of the character of Romeo and his training methods. The man has taught more than a few fighters and it seems he knows what he is doing. Well he knows everything except how to end a relationship with a fighter… or I should say a fighter’s brother.

Now we all know that Johnny is not the greatest of brother. He has stolen, gambled, and done who knows what else with Lights money. At times, I caught myself feeling sorry for Johnny but, then quickly turning on him as he screws something up. This week I felt Johnny stepped way out of line in terms of handling personal problems. While Johnny was a, for lack of a better term, dick this week, he hit a low point as Romeo came to pack his things up. The two men have had tiffs throughout the episode but at this moment, it all came to a head as both men fought. I myself would have choked out Johnny had he pulled his stunts on me. In the end, Romeo choking Johnny didn’t end badly for Johnny but, it ended horribly for Lights. With Lights suffering a major injury by Johnny’s hands, it will be interesting to see how the relationship between the brothers changes.

Finally the last person Romeo has a major relationship problem with is Death Row. As we learned last week, Romeo allegedly raised Death Row. I am still skeptical about this but it would explain the hatred both men share towards each other. I’m starting to think that Death Row is looking fake in terms of a fighter. I don’t mean that he doesn’t fight but, that the way he lives contradicts the way he is perceived. He constantly brings up Romeo to Lights in hopes of scaring him but it show that Death Row himself is the one scared. With Romeo now out of Lights’ training, it will be interesting to see if Death Row regains he confidence and swagger he had at the beginning of the season.

With Lights ending his relationship with Romeo, it seems like he also ended his boxing career as well. With this big shock moment ending the episode, Lights Out was able to go from start to finish with hard hitting drama. This episode really showed up how great the series is and what the show should strive to be every episode. A+