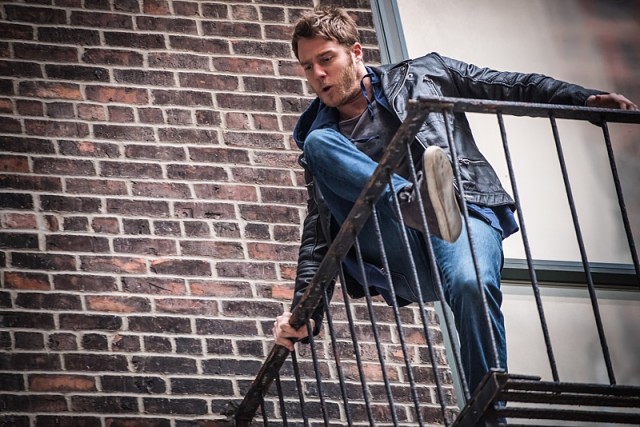 In the pilot for the show Limitless, we first have to re-hash the plot of the movie for those who didn’t see it. Actually, first we are shown the effects of the drug, NZT, and then we see the main character’s life leading up to that point.

Meet Brian Finch (Greek‘sÂ Jake McDroman), a going-nowhere musician who goes from temp job to temp job. In the movie and the show, someone from the past, here someone from his band, offers him NZT. He takes it, and he needs more. He goes to get more only to find his dealer dead.

In the end, Brian solves the case, thanks to the help of an FBI agent, Rebecca Harris (Dexter‘s Jennifer Carpenter), which quickly established the weekly procedural part of Limitless, as Brian and the FBI will work together to solve new crimes in every episode. However, LimitlessÂ gives this format a little more depth with providing a strong reason for whyÂ Rebecca would want to work with Brian: her father died of a drug overdose, and the last time she saw him he was on NZT. Brian’s her best connection that drug.

Also, I should mention that Bradley Cooper’s character from the movie Limitless,Â Edward Morra (well, Senator Edward Morra), stopped by and talked about an upgraded version of NZT. He gave Brian some sort of injection that ensure that the effects of the drug would not kill him, like it had done to so many of the test subjects that had taken it before, and Morra made Brian promise that the conversation would not leave that room, threatening him that if he told anyone else about what they discussed, he would pay.

I’m not going to sit here and say that everything made complete sense inÂ Limitless‘ pilot. For example, when Brian was patching a bullet wound and needed to think about something else, Rebecca reminded him of a picture she had seen at his parents’ house. Now, I understand that she may have asked his parents about the picture after the scene, but I highly doubt she asked them specifically what they were eating and where. Also, it seemed oh so convenient for Brian’s dad to have a medical problem and no one know what it is. Really? Could they have made it any easier for this drug or show?

Overall, LimitlessÂ got off to a pretty solid start in its series premiere. My only worry is that with everything else on the TV landscape, the series may just get lost in the crowd. Fingers crossed that it doesn’t!