Home
Limitless
Limitless Season 1 Episode 11 Review: “This Is Your Brian on Drugs” 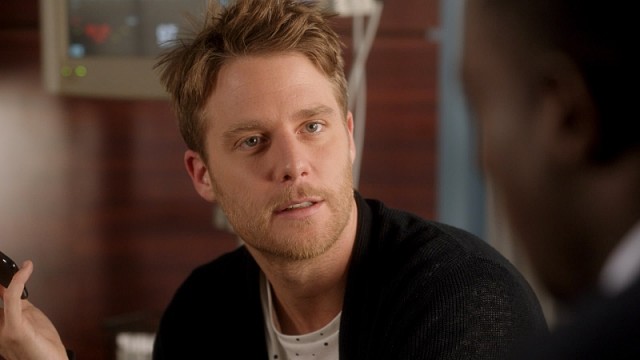 Limitless‘ fall finale was a really strongÂ episode for several reasons. First, it brought together a lot of different viewpoints of the different characters. It started out with Mike and Ike, followed by Rebecca, and so forth. Even Stavros the janitor made a minor cameo appearance as an interlude! It really gave the viewers a brief glimpse of what life was like in each character’s world, not just Brian’s. For example, you saw that the job of being Brian’s bodyguard is just a temporary for Mike before he moves onto bigger things at the CJC. You saw that Boyle has a sick mother that he has to take care of. You normally wouldn’t have gotten to see those points of view. You just would have gotten to see Brian’s.

Secondly, we saw someone stealing NZT from the drug pharmacy. Now, I’m surprised this storyline didn’t already come up. I figured that Brian’s “kidnapping” storyline, so to speak, with the CIA could be done after this, but who am I to say? In this episode, the NZT, along with other high street value drugs, were stolen from the dispensary, and the CJC was tasked with getting them back. After they did, they realized that some NZT pills were still missing. It turned out that Casey Rooks’ (aka Rebecca’s boyfriend) men had actually taken them and were using them. At first, they were using them to participate in a fight club and a rooftop climb. Then, Rooks received a call in the morning saying that one of his men had killed the other because he was sleeping with his wife. Now Rooks, on NZT, realized he could go to Naz and say the dead man had gone missing with the NZT. Unfortunately, Brian caught onto the plan, and he and Rebecca end up getting kidnapped by Rooks and his crew before Boyle comes in and saves the day. In the last shot of the fall finale, Boyle finds that one NZT pill that Rooks had dropped. I always knew that NZT was worth an insane amount of money, but I didn’t think that they were going to tie it into Rebecca’s break-up with Rooks.

Next, I liked seeing Brian taking some responsibility for once. Yes, I know that he has done this in the past but this episode of LimitlessÂ dealt with his long-standing ‘abuse’ to so speak of Mike and Ike, his two bodyguards. It showed how neither of them enjoyed dealing with him and how he had them doing menial tasks. Finally, when Ike was shot, Mike told Brian to gain some respect for them. After that, Brian definitely started questioning himself. He asked Rebecca what she thought of him, and in the end, it turned out that Ike’s name is Jason.

Lastly, the tension between Boyle and Brian is coming to the surface again. After the stand-off between Rooks and Boyle, he told Naz he had no other alternative while Rebecca said that Brian might have seen some. At his house with Brian after, he wanted to know what they were and Brian told him that he could have talked Rooks down or tried reasoning with him and not used force. Boyle only sees an untrained agent in the field when he looks at Brian, and as much as that is what Brian is sometimes, when he’s on NZT, he’s so much more. Boyle and Brian are both going to have to come to terms with that in order to move forward. It’ll be interesting to see how Boyle having the NZT pill now affects the show.