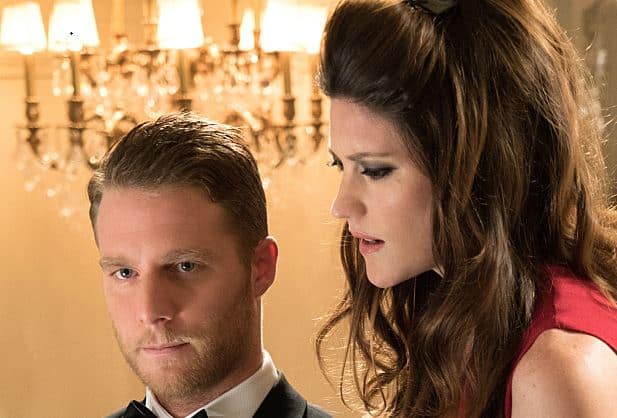 Watching this week’s episode of Limitless, I was curious to see what the show was going to do to further the plot beyond the movie and the pilot. All that had been done was setting everything up. I was pleasantly surprised. Not only did I discover that Brian Finch (Jake McDorman) was a completely relatable and funny guy, but I also enjoyed way the show used different methods to highlight his skills. When he was explaining how he learned to lip read, they showed everyone in the office with comic book text bubbles above them. When he was studying Farsi, they played not only the words in English and in Farsi but also showed the words surrounding him.

It’s also cool to see how his mind is without the NZT, the pill that makes you super smart. In the scene where they are in Rebecca’s apartment but he’s off it, he keeps trying to explain all of the science to her but he can’t. He has to keep referring to papers he’s looking for and can’t quite think of the right words. On NZT, Brian’s the smartest being known to man. Off of it, he probably feels slow as a snail and that’s how he acting.

What was also interesting was how the show was trying to keep up with the science. They always could have said bio-terrorists planted the virus and leave it at that. Instead, they went a step further and began explaining a genetic-trait virus that’s in experimental stages today, making the threat feel more real and believable, even in a high-concept series like this.

As for the characters, as stated, I think that Brian is the most developed and fleshed out. I would like to see at least Agent Rebecca Harris get to this point. I feel that the actress who plays her, Jennifer Carpenter, can only play one emotion at a time. She is a good actress, but her character needs to be able to show different sides to her. Also, she needs to be given more to do. I know that the show’s about Brian but give Rebecca something more: a family (aside from her father, whose death is driving her story), friends, a boyfriend, a hobby–anything would be nice.

Additionally, Boyle, Harris’ partner, seems like an entirely new character than he was in the LimitlessÂ pilot. In the pilot, he seemed like he may be a straight face to Rebecca’s agent or maybe a comic foil. Right now, it seems that his only role is to not like Brian. I will admit, though, that I did like Brian hearing the Peanut’s teacher voice when the FBI boss was yelling at him. That was good!

As for the case, The Mysterious Death of Stephen Fisher, it worked well. However, LimitlessÂ havingÂ Brian’s dad needing something else surrounding his surgery and thus havingÂ Brian take care of that was a little repetitive; Â it was as if they had done the storyline from the pilot all over again. What did change, though, was the nurse who came was the nurse who had given Brian that initial doze of NZT with Edward Morra. That definitely made this somewhat repetitive storyline more interesting.

Lastly, the pacing of this episode was very strong, and I liked howÂ LimitlessÂ kicked off the events of “Badge! Gun!” right where its pilot had ended. Here’s hoping that, along with this quick, exciting pace, we also get some more serialization, like anÂ over-arching storyline where Brian finds out who makes NZT or something along those lines. That’s piqued my interest since I first saw the LimitlessÂ movie so maybe the show can answer that question.