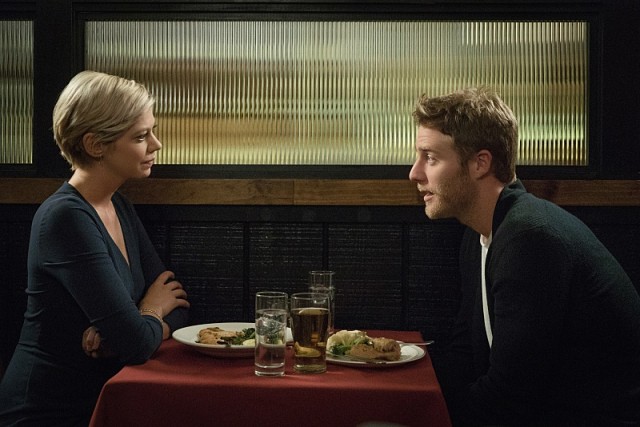 In this week’s episode of Limitless, Brian and Rebecca try to solve the death of a former agent who was very important to everyone in the office, including Rebecca. In the end, rather than it being one of the various candidates he was researching to become a new CEO, it was a crooked cop who he got too close to.

While that story was the A-plot, the B-plot of “The Legend of Marco Ramos” was Brian re-connecting with Shauna, his ex-girlfriend who was “the one who got away.” He eventually had to break ties with her, but we’ll get to that. I like that LimitlessÂ is giving us a little personal story about Brian to go along with its case of the week in each episode. The only problem is that when one of the plots doesn’t have anything to do with the main plot of the show, which is a man who has to take NZT, I feel like it detracts from LimitlessÂ in general. When Brian does show off and use the NZT, it’s amazing. He’s re-creating shredded documents and telling a guy that he’s actually a pup breeder, which was hilarious. However, it doesn’t make or break the case. It’s something the FBI could do if given even time. It also makes the FBI’s job seem tedious to viewers. Brian is always saying how’s he going out into the field or he’s collecting this piece of evidence. All I heard Harris’ partner say this entire episode was how he’s going to run financials. I know that is a crucial part of the job, but I also know that there is more to working in the FBI than that.

I know I’ve said this before but I feel that unless you’re Brian or Rebecca, you just have a name and a characteristic and that’s it; LimitlessÂ hasn’t attempted to establish or explori its supporting cast at all.Â There’s Rebecca’s partner, who just seems to be annoyed all the time at Brian. Brian’s dad, who is always grateful. Mike and Ike, his bodyguards, who are always trying to protect him, although at least in this episode Brian was trying to bond with the bodyguards. As for Rebecca, she’s finally coming into her own. She’s developing a past (not much of one but baby steps….) and was giving Brian advice.

Finally, I am liking Brian more and more. Whether he’s getting ideas from pop culture (Did that idea really come from Miami Vice or was he just making a joke?) or taking another street player’s instruments, he’s just always looking to have a good time. What’s also veryÂ cool is how Limitless puts you into Brian’s mind;Â if there’s information that the viewer has to know from reading, somehow the viewer knows, whether it is a flashing white ‘suspect’ sign above a person’s head or a faux comedic documentary about a drug cartel. I think that works great and is a smart and unique change from the LimitlessÂ movie.

Finally, the reason Brian broke up with Shauna was because Mrs. Sands showed up. Sands is another employee of Mr. Morra and basically tells him that from this point on, whenever they need it, Morra’s campaign or the people funding it will give Brian missions. They said if he doesn’t do them they can strike at the people he loves, including Shauna. I understand why this happened but it seemed that LimitlessÂ just keeps piling on plot point on plot point. First, you have Brian and the FBI. Then you have him and Morra and now the missions. Then you have Brian’s father, who I’m sure will have medical issues at some point later on down the road. Then you have Rebecca’sÂ father, who was on NZT before he died. LimitlessÂ is juggling a lot of balls right now, and I’m anxious (although not too hopeful) to see if the show can not only tell but resolve all of these stories in a satisfying way.