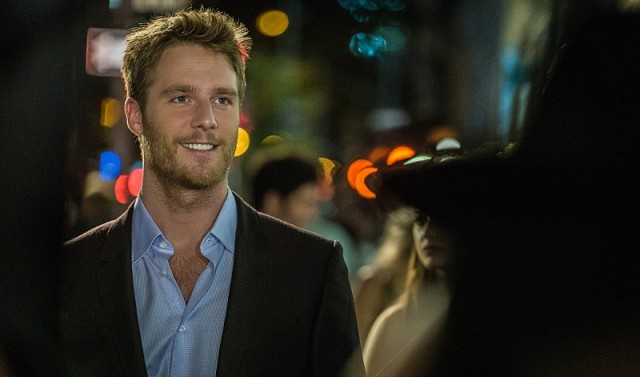 On the one hand, this was a traditional episode of LimitlessÂ (if you can have one this early in this series). In it you had the A-Plot, B-Plot, and in this episode there was even a C-Plot! Before I tell you what I actually thought of the episode, here’s a brief rundown of those storylines.

The first plot involved Brian looking into the death of one of the founders of Claxion, a premiere research company. While on NZT, he had been talking to the other disgraced founder, and he needed Brian’s help when he was set up. Next, we have Sands giving Brian his first mission for Morra: get a copy of the file that the FBI has on NZT. This causes internal conflict for Brian because not only has he just started working for the FBI, but Rebecca has just started trusting him. Finally, we discover that Rebecca’s father was a painter before and after he was doing drugs, a fact which Rebecca only knew the prior. When a gallery owner asked if she wanted to see his last three paintings, she did, and one of them was an amazing portrait of her! At that same moment, looping back into the FBI file, Brian found out Rebecca’s father was definitely using NZT.

Now, this episode has to be my favorite hour of LimitlessÂ yet. The first one was just the pilot and setting up the show. The second one really took us through Brian’s first case. The third one essentially raised the stakes just to introduce Sands, Morra’s associate. It’s not that I minded any of those, but “Page 44” was the first episode that Brian really began taking us into his world of NZT usage.

In the beginning of the episode, he has a one night stand with a girl but comments, “When NZT turns hooking up into an algorithm, the fun wears off.” Also, the audience sees the differences in how he sees things. He sees the disgraced founder of Claxion and wonders if it was the drug that made him seem like a genius or if he was always this crazy. He’s questioning, whether he realizing it or not, the way that NZT is making him perceive the world. The audience knows it makes everything brighter (the lamp burns a little bit higher, his eyes dilate, etc.), but we don’t really so how his mind perceives it. Next, stealing the NZT file from his job was treason. He was trying to deal with that while still staying loyal to Rebecca. Ultimately, his dad got sick, again, and he knew he had to get it. What I thought was interesting was that the FBI brought in a spy, and when he was giving his confession, it flashed onto Brian getting the file.

There were a few side notes, per se, in the episode. First,Â LimitlessÂ had just stopped using the Brian’s dad’s medical condition as a story point before they started using it again. I know that we’re to presume he’s okay but it’s going to diminish the effects of any medical problem he has if the writers keep bringing it up and using it all the time.

Second, I love that we saw some character development for Rebecca. Between finding out about her past and seeing her genuinely talking with Brian, it all provided some really nice moments for a character we didn’t know a ton about yet. I hope we see more of that. She and Brian even had a better rapport than I thought when they were going through the actual murderer’s garbage! I’m not sure how he’s going to tell Rebecca her dad was on NZT without giving away the fact that he stole the file, but I’m sure it’ll come up.

Finally, when all of the patients who had NZT were coming up on Brian’s computer, and it showed Rebecca’s dad, it said, “Artistic abilities were enhanced while on NZT-48.” Does that mean that different people can have different types of abilities? That would make for a more interesting show later down the line. Food for thought.