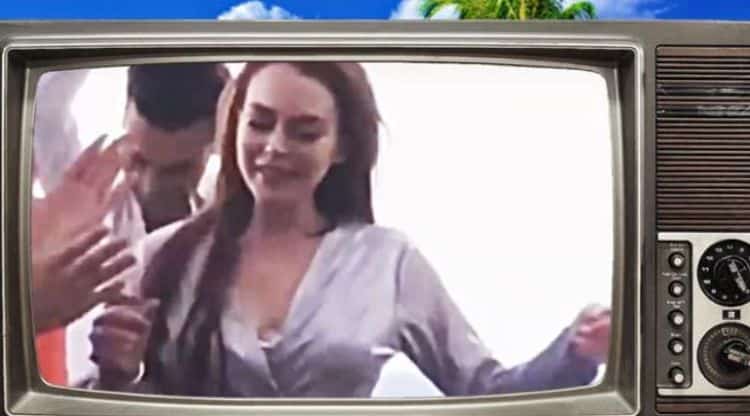 There are so many things to say about this, but one that should be kind of obvious is: why? That one question can be taken so many different ways, can’t it? Why would she come back? Why would anyone care? Why is she intent on getting in front of the same people that have mocked her relentlessly for years? Why, oh why, is Lindsay Lohan coming back with a new music video? If the answer is ‘because she can’ then it might be time to get the cameras ready and limber our fingers as writers to start coming up with different ways to say “I told you so” when, or if, she eventually crashes and burns. Let’s be fair though and say that there’s more than a snowball’s chance in hell on a downward and super-heated track that she could make a comeback. What does that mean though? Lindsay Lohan has done just about anything and everything a person can do to wreck a career, now it’s a matter of seeing whether or not she has what it takes to resurrect her own reputation as she tries to win back a lot of the fans that at some point just had enough of her. There are still plenty of people that are willing to think that she can go back to the innocent woman she was once perceived as, or will defend her every decision by stating that she was yet another victim of the child actor syndrome.

A lot of people are still willing to put enough belief in Lindsay despite the fact that a lot of what she’s tried in recent years has been moderate to not successful since she hasn’t really done anything worth that much, at least in a major way, since she was much younger. Her singing has been the cookie-cutter type of pop no matter how anyone wants to spin it, and that’s really all her career has been for a while, spin. She’s grabbed onto the societal carousel and has been going around trying to grab up whatever spare popularity she can find throughout the years since what she came in with has faded and dwindled quite rapidly. Coming back with a music video now is something that almost feels like a last gasp, or a hopeful hand up towards something that might be able to catapult her into the mediocrity once again and possibly, if she’s lucky, allow her to tuck and roll right into bigger deal what will last until she either changes everything up and fully matures, or crashes and burns when people finally note that she appears incapable of changing. It might sound extremely cynical, but like several other starlets that have come and gone throughout the years Lindsay has made one poor choice after another and had a lot of people convinced that it wasn’t her fault because she leads such a stressful life. Her parents were divorced and she has since stopped talking to her father for a while, but let’s face it, she’s had enough in her bank account to afford a top-notch psychiatrist and possibly a life coach to help straighten her out. Barring that, her struggles are her own and taking a long sabbatical to ‘sort herself out’ would have been one of the best ideas possible. Jess Bollyut of the CheatSheet has more to offer on this topic.

Am I hoping she tanks? Nope, not really, because like any other artist she’s entitled to try and to make the best attempt she can at getting her career back in order. As a person that might listen to her video I can always turn it off if I don’t like it, just like anyone else. But do I think that she’s going to be a big star yet again? That’s harder to say since, with the knowledge of how fickle people are, it might come down to whether or not people are willing to believe that she’s worth the effort again. There are so many up and coming stars out there at the moment that an aging, yes she is aging despite the fact that she’s only 33, pop star is going to have a very tough time competing with those that are just coming up in the world and have a bright, fresh sound and look and don’t look as though they’ve been through the ringer a few times. People are usually more attracted to the next big thing, not someone that’s attempting to make a comeback….again. I won’t exactly wish Lindsay well, but I won’t wish her ill either since like I said, everyone deserves the chance to follow their dream, but those that achieve it are usually those that don’t tend to be a walking cautionary tale. As Jessica Napoli of Fox News says, don’t call it a comeback. If things don’t go well for Lohan that might be more accurate than Jessica realizes.