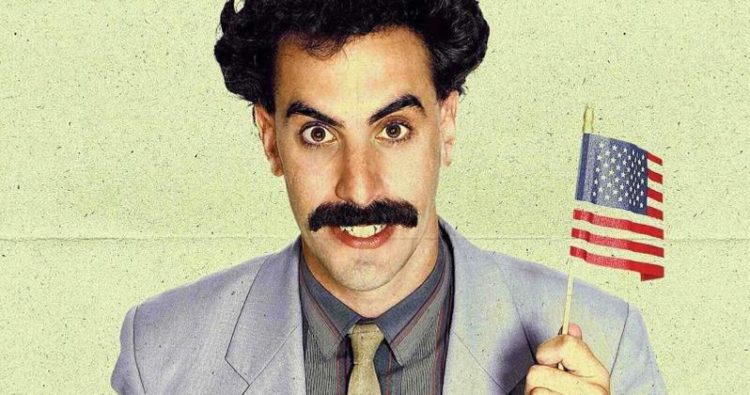 In an era when people are ‘hungry for content’ as some sites state, it’s pretty obvious that many have a hankering for junk food that’s just confusing and not all that good for them if Borat 2 is what they’re wanting. It can’t be said that the original movie wasn’t successful since it earned far more than its budget, but it also shows that spectacle is what people want and are willing to pay for and that story is not as important to a lot of folks that would claim otherwise. It’d be great if more people could be honest and state that Borat’s original story was, for the most part, fairly ridiculous since Sacha Baron Cohen was out to create something that was based on shock value for much of the movie and an odd but obvious sense of comedy for the rest of it. But a sequel to Borat? There’s no doubt as to why the idea of the movie is going to be Borat going undercover since the first movie left a bad taste in a lot of peoples’ mouths considering that the character went out of his way to offend as many people as possible in the name of comedy. This is where it’s too easy to sound like a hypocrite since comedy is supposed to be fringe and go against common sense and what people find to be normal. Yet somehow Cohen pushed even that boundary and made it clear that he didn’t care if he stepped over the line or did something even worse over it. Arguing with the success of the movie isn’t a wise move since it’s a losing argument. But not watching it, that’s pretty easy.

This is what too many people don’t tend to realize since they don’t have to watch the movie, but it also gives them less room to criticize it largely because they don’t know what the movie is all about since for all they know it could be something much different than what they’ve been told. Having watched the first movie I’m fairly confident in stating that while there might be some outrageous moments that come close to comedy in this movie, Cohen really isn’t that amusing since his entire gimmick is about being fringe and it’s hard to know when he’s being serious or when he’s acting. In fact, Les Miserables is about the funniest he’s ever been in my opinion and that was because he had to follow a script that actually stuck to the movie and wasn’t intended to blatantly offend anyone. Offending people is a tricky issue really since these days a person can offend someone simply by waving at them or telling them to have a good day. There are moments when it feels as though Cohen might be funny, but then he crosses the line again and one can’t help but shake their head as they wonder just why people laugh at this guy.

There’s nothing to be done for it though since the movie has apparently already been filmed and is being shown to those that might have an interest in bringing the character back to the mainstream. All some of us can do is roll our eyes, groan, and wonder when another golden age of film is going to come along since this isn’t it at the moment. Right now we’re living in an era of reboots, remakes, and sequels that are typically ill-advised and are slowly but surely convincing people that this is as good as it’s going to get and that they should get used to it and just enjoy it as much as they used to enjoy original and innovative movies that used the be the norm. Some people find Cohen hilarious, so this movie will obviously be for them, but others are bound to watch it out of curiosity or not at all, and it does feel as though the movie will still make money despite this. Like it or not, Borat was a favorite of many people for a slew of catchphrases and a few other things that people might still emulate. This style of comedy is definitely something a person needs to have a taste for since otherwise it’s not quite as desirable as so many others, and yet people are willing to sit and watch the movie or one reason or another considering that the movie made its budget back and so much more.

Obviously the sequel will find an audience since the first one did so well, but there’s no word yet on when it will be coming out or if it will be in theaters or directly to video, though the former does sound as though it might be the preferred option. Get ready for round two, because it’s likely to be just as crazy.