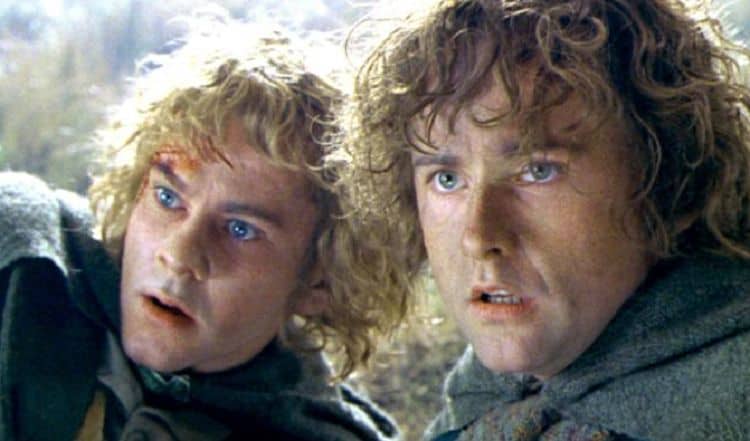 Plenty of fans are excited to know more about their favorite movies whenever they have the chance, and The Friendship Onion with Billy Boyd and Dominic Monaghan is going to be one of the best ways to learn more about The Lord of the Rings trilogy, from a certain point of view at least. Coming May 18th, Boyd and Monaghan will be taking on a podcast that will reunite them to talk about their time as Merry and Pippin, roles that they haven’t played in a couple of decades but are still very close to. It’s already sounding as though the podcast will be featuring guest stars from the movie, including cast and crew that worked on the trilogy, and that the pair will be delving into the lore and knowledge of Peter Jackson’s trilogy to test their knowledge and that of their guests. It’s bound to happen that plenty of fans will learn of this and decide to tune in since LOTR fans are still plentiful and are likely wondering just what Amazon’s upcoming series will offer since it happens to be set so far ahead of the original trilogy. It’s fair to think that these two will end up discussing the series as well now and then, as it could open up a few interesting discussions that people might want to engage in. There’s no doubt that they’ll have plenty to say concerning their own involvement in the trilogy since Pippen and Merry were in fact quite noticeable and among the four hobbits that took the center stage they were two of the three that really developed over the course of the movies. It might sound fair to say so since Elijah Wood still played his part and did it well, but there is still a feeling that Frodo was one of the most useless characters in the story.

The reality is that he had one of the hardest tasks to be certain since despite appearing weak and unable to defend himself, Frodo had to contend with the will of Sauron as it was sapping at his strength throughout the trilogy, wearing him down with each step that was taken towards Mordor. It’s hard to say whether or not any of the others would have been able to resist the evil quite as much, but the unfortunate impression that was given was that Frodo had to carry a ring and simply couldn’t do anything else. To be fair, that’s like asking someone that’s carrying a heavy load to run as fast as they can for a prolonged period of time. In terms of development, Frodo wasn’t given much of a chance, which is why his demeanor grew steadily more and more sour and weak as the movies went on. Samwise, Merry, and Pippen however were allowed to develop in a very profound manner as they were forced to experience the world outside of the Shire in ways that they hadn’t expected. This, in turn, forced them to adapt, and the three hobbits did just that, causing each one of them to become something they’d never expected to be as they each became fighters in their own right. They might not have had a chance against skilled opponents, but it’s the fact that they stood up and became their own people that was impressive. Merry even went so far as to stab the Witch King to save Eowyn, while Merry showed great bravery in lighting the signal fire that would call upon the forces of Rohan to help Gondor. Sam, well, his story goes with saying since he not only stood up to Shelob but also saved Frodo and killed a number of orcs in the process.

Boyd and Monaghan will have plenty to talk about without any doubt since their experiences in the trilogy and their memories will serve as a nice base for the show. The guest stars they’ll have on will shed more light on the story obviously and it does sound as though this will be a fun and engaging time for anyone that wants to listen in. Considering how many podcasts there are to choose from it’s fair to say that this one will have to drum up a bit of interest to make it work, but that shouldn’t be too much of an issue considering that Boyd and Monaghan are still quite popular among LOTR fans. The trilogy is still mentioned plenty these days and has been the kind of phenomenon that has managed to endure for many years following the release of each movie. In fact, it’s been one of the most popular movie trilogies ever created, so thinking that they’ll have plenty of people that will be paying attention isn’t hard to believe at all. This coming May 18th it might be a good idea to tune in and see what happens.