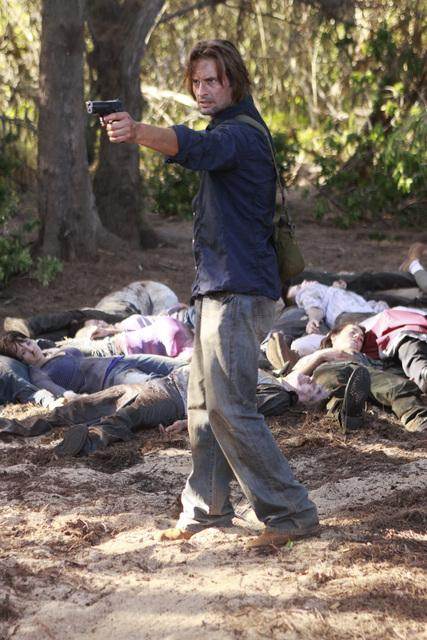 “Recon” defied expectations, but that doesn’t mean it was a stellar episode. It had some flaws (mostly in the disjointedness of the flash-sideways) that had me yawning at times. However, the main Island storyline kept me glued to the television, especially as Sawyer finally returned to doing what he did best: conning.

For those of you who haven’t kept up with the episode centricities, “Recon” returned to the season one order of centricities. “Sundown” and “Dr. Linus” deviated from that order (with Sayid and Ben replacing Sun and Charlie, respectively). However, 1.08, “Confidence Man,” corresponded to this episode in that they were also eighth episode Sawyer-centrics (just for fun, “LaFleur,” episode 5.08, was also Sawyer-centric). Of course, seeing as 1.09 was a Sayid centric, it’s unlikely that next week’s episode will follow the pattern.

If I can say one thing about the flash-sideways timeline, I must say that it did a really good job of setting up the twist that Sawyer was a cop. The con played out almost exactly as it had in “Confidence Man” six years ago, until his potential victim pulled a gun on him, turning the gun and revealing that she knew he was trying to con her. Sawyer, in return, turned the tables by calling in his fellow L.A.P.D. agents and arresting her (he had apparently been trying to catch her husband). Miles, Sawyer’s police partner, serves a similar role in the flash-sideways timeline as he had in the Island timeline (in that he worked with Sawyer in DHARMA security). Unfortunately, as great as this scene was, it played almost no role in the actual events of rest of the flash-sideways, other than revealing Sawyer’s profession.

Instead, the flash-sideways focused on Sawyer’s (known in the reset timeline as Jim) attempted courtship of Charlotte Lewis (a fantastic return by Rebecca Mader, who made me realize how much I missed her character), which ultimately failed when she stumbled upon the scrapbook in which he contained his entire investigation of the man who conned his parents. He, of course, impulsively yelled at her and told her to leave. Of course, after a little heartfelt lesson from Little House on the Prairie, Jim changed his mind and showed up at Charlotte’s door — but it was too late. “You blew it,” she said to him, closing the door in his face. He left the sunflower he had brought at her doorstep and walked away.

Charlotte’s appearance made me wonder one thing, though — how is Daniel Faraday coping with this timeline. Obviously, since the Island his gone, the purpose that his mother drove him toward no longer matters. So is he, perhaps, a concert pianist, or a musician of some sort? That’s what I’d like to see — a truly happy Daniel Faraday.

After this rejection, Sawyer dejectedly revealed his plight to Miles, who had been unaware of Sawyer’s daddy issues. Miles didn’t approve of Sawyer’s actions (like Locke, he had lied about his trip), but that didn’t matter, because they soon found themselves pursuing a fleeing criminal, who just happened to be — Kate. “Son of a,” Sawyer quipped, but he couldn’t have looked happier.

The most interesting aspect of these flash-sideways is that all of these changes we’ve seen seem to be results of one decision that changed everything for them. Sawyer elaborates to Charlotte on their date that he had the choice of being either a cop or a criminal, and he chose to be a cop. I’m interested to see what caused these changes, the most likely reason being the absence of Jacob’s influence.

The Island timeline had quite a bit more to offer, though. There was, of course, the Kate/Claire dynamic that went on in the episode, which surprisingly yielded the most mythological fruit. Kate, while talking to an extremely emotionally distant (zombie?) Sayid, was attacked by Claire, who tried to murder her for taking Aaron (as she had promised to do in “Lighthouse”). Unfortunately, she was unsuccessful, as the Man in Black picked her up, threw her off Claire, smacked her across the face (good job, sound team!) and told her to go sit by herself — he’d deal with her in a minute.

Meanwhile, the Man in Black also sent Sawyer on a mission to the Hydra Island to perform the titular “recon” (though Damon Lindelof claimed through his Twitter feed that “recon” was a verb which meant “to con again”). He claims to be wanting a tally of the Ajira survivors, but that turns out not to be the case. (Here the MIB injects a very interesting comment. When Sawyer sarcastically apologizes for not minding his manners, MIB very stiffly says, “I forgive you.” Since we know that he’s been quite judgmental as the smoke monster, is this showing the gentler side of his very sharply divided coin? We saw what happened to Mr. Eko when MIB didn’t forgive him.) Sawyer realizes this when he finds a stinking pile of all the survivors’ corpses. That is, except for one survivor, named Zoe, who claims to be the only one left.

Meanwhile, on the main Island, Man in Black takes Kate out to the beach, where they sit down and have a heart-to-heart. Man in Black gave away a lot about himself during this little discussion, after he shows Kate the Hydra Island, so that she can know where Sawyer is. In fact, Man in Black gives us a big mythological download that left my jaw somewhere on the floor and me too astounded to pick it up.

Man in Black shares about his mother, who was “crazy,” and had quite a big influence on his life, shaping him in to what he was then. It’s very interesting to hear about this entity’s mother. Is she Jacob’s mother as well? It wouldn’t be surprising, given the fact that the MIB is often called Esau. I bet we’ll see the mother in the future. 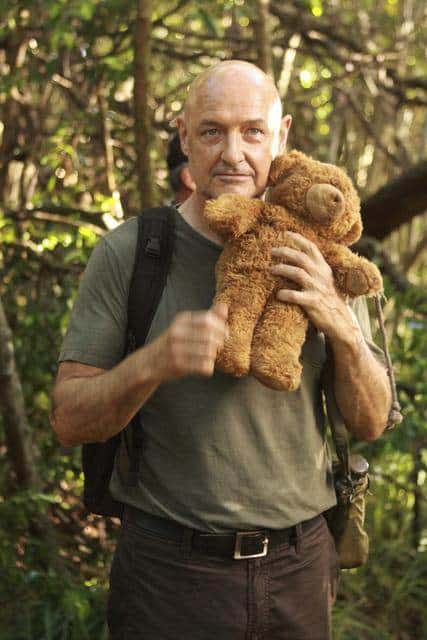 Claire later finds Kate in the jungle, and tearfully hugs her, apologizing. “It’s alright,” Kate says, and though the moment is heartfelt from Claire, it’s obviously awkward for Kate.

Meanwhile, on the Hydra Island, Sawyer reveals to Zoe that he knows she wasn’t actually a flight 316 survivor. For the second time in the episode, the tables were turned twice in a row, though this time not in Sawyer’s favor. With a whistle, Zoe summons several heavily armed people out of the jungle, who lead Sawyer at gunpoint to a submarine, where they take him to meet Charles Widmore. On the way, Sawyer sees a locked door. He asks what’s behind it, but the grunts with guns (I haven’t quite thought of a clever name for them yet) won’t tell him. My guess on what’s behind door number 1? Desmond. Maybe or maybe not Penny as well, but definitely Desmond.

Charles Widmore introduces himself, but Sawyer snubs him, showing that he’s still bitter about the mercenaries from season four, whom Widmore sent over on the Kahana. Widmore denies that the mercenaries were sent to kill them all, saying that Sawyer doesn’t really know much. Sawyer then deduces that Widmore wants the Man in Black dead, and so he promises to go over there and tell MIB that there’s no one over there, so that when they take the trip, Widmore will have the advantage — so long as he spares Sawyer’s boat. Widmore grins and agrees.

Of course, Sawyer was only lying, and reveals his plan to MIB, who thanks Sawyer, thinking that Sawyer has given him the advantage out of loyalty. Sawyer had no such motive, however, and reveals to Kate that night that he intends to let the two groups fight it out while they escape the Island — in the sub.

There were a few weaknesses to the episode, mostly in the fact that one of the flash-sideways didn’t really fit in with the rest. Other than that, though, it was the most solid Sawyer episode the show has ever had, especially with all the wonderful double-crossing that has been so long absent from the show since all the great manipulators have been redeeming themselves. It was a solid episode, but I’m more excited for next week. B+