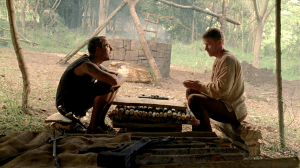 I’m a little on the fence about this one.

On one hand, I can honestly say that I found “Across the Sea” to be a brilliantly written character piece centering on Jacob and MIB’s relationship and what led them to hate each other so much. On the other hand, I can’t help but feeling that this episode was too little too late. We didn’t really get the huge answers that we were promised with this episode. In fact, the answers that we did get only raised more questions. The answers that we didn’t get (like who built the statue) felt like they should have been answered in the episode, but simply weren’t.

In fact, that seems to be the fan consensus about the episode: it was disappointing. After all this buildup between Jacob and MIB, we finally got what we thought would be the mythology episode of the season. Reveals to end all reveals, and perhaps some answer to the mysteries of the Island — some hardcore answers. Instead, what we got were some decent answers, a bit of a slow-paced episode, and a hell of a lot more questions. With two episodes left in the series, this is not a good thing. This episode should have taken the place of “What Kate Does” way earlier in the season. It would have probably been praised, adored by fans, much like “Ab Aeterno” was when episode nine of the season rolled around. But we’d all already seen “Ab Aeterno” at least once before this episode rolled around, and this felt like “Ab Aeterno 2.0.”

The amount of time focused on Jacob and the Man in Black as children was, despite good writing, incredibly slow. I’ve already said it once and I’ll probably say it again: this episode would be considered a classic if only it’d been aired earlier. But it was too slow of a follow-up to “The Candidate.” Like the aforementioned “What Kate Does,” it was a huge speed bump for the momentum of the show. Because really, the entire stretch of the episode of their childhood could have been narrowed down to two or three scenes — an establishment of their friendship and differences through the game-playing scene, their discovery and discussion of the other Island inhabitants, and then MIB’s defection to the other side. That would have been all it had took, and we would have had room for other moments, like Jacob and the new smoke’s first meeting, or perhaps more establishment of “the Rules” that have governed their relationship. Even a little more of a focus on the other castaways would have been well-deserved. Instead of a bunch of redshirts, we could have gotten to know a couple. A few lines of dialogue from a fourth character could have established things like whether or not they built a statue, something like that.

Here’s something else that bothers me — the well. Now, if we’re to believe correctly, MIB’s “people” dug the well, and were going to install the frozen donkey wheel. But before the wheel could be installed, Mother knocked MIB out, filled the well with dirt, and killed all the people. So who re-dug the well, and why did they carve hieroglyphics in the wheel chamber? We can assume they were the ones to build the statue, but to assume that a bunch of Swedish-speaking white guys worshiped Egyptian deities and created all these secret tunnels and the Temple? Preposterous. That was something that this episode had the power to answer, and now, after this episode, I doubt we’ll ever get an answer. No episode has ever shaken my faith in LOST answering the big questions as much as this one has. Damon and Carlton have even confirmed that MIB will not receive a name on the show. Dodging that answer seems a little silly to me, but then again, a lot of the dodged answers of “Across the Sea” seemed a little silly to me.

But I don’t want to be all Mr. Negative. I’m not going to claim that this is one of the worst episodes of the series (as some readers have proclaimed), or even the season. No, it was a solid outing, and it kept me entertained throughout. It simply left a bitter taste in my mouth, because this was not the mythology that we were promised, and I’m sure most of us felt like we deserved. Like “Ab Aeterno,” it was a character-centric episode that presented us a limited window with limited answers. But Jacob and Richard Alpert have nowhere near equal amounts of mythological significance, and this episode made it feel like the writers were trying to convince us otherwise.

But I digress. Despite the slow pacing, the characterization in this episode was beautiful. Like many characters who once seemed all-powerful (Ben, Richard), Jacob was given somewhat humble beginnings, and was definitely shown to be less than the deity we had been led to believe he was. He had been manipulated by Mother, who turned out to be the real person with answers, very few of which she appeared to share with Jacob. How did he come to know all this stuff? And did she really just cast a spell on some wine to make Jacob the Island’s immortal protector?

Another positive aspect of the episode was the transformation of MIB from a simple evil entity to a more complex man who is simply goal-driven. Seeing him in tears as Jacob dragged him to the light-tunnel and tossed him in was sad, and I really felt for the guy. That is, until I remembered the submarine. I think Titus Welliver is just that good of an actor.

But speaking of the light tunnel, I’m not sure what that is yet. It was called “the Source” in the episode (perhaps MIB’s real name is Neo!). I’d love to say that it was just a pocket of electromagnetism, and that the fact that the light “inside” everyone could be written off as naturally occurring electromagnetism in the electric pulses of the body. But the way it was presented throughout the episode, it seems to be a little more supernatural. Take, for instance, the fact that it goes out after MIB is reborn as Smokey. Is it really a force of good that Smokey triumphed over, or is it, as I like to believe, the real evil trying to escape the Island? After all Mother said that taking a trip down the golden waterfall would end with a fate “worse than death.” Since MIB was already dead when he took the trip, I’m not sure whether or not it’s safe to say that coming back as Smokey is a fate worse than death. I just can’t help but thinking of the bright light that Locke mentioned seeing in “Walkabout.”

A few more answers from Darlton come from the interview I linked to above, especially including an answer about Jack’s estimation of the degradation of Mother/Brother’s clothes of 40/50 years. Though this episode was supposed to prove that they knew what they were doing from the beginning, that interview makes me believe that they didn’t have quite as firm of a grasp as they’d like to have us believe. And that’s fine, it’s a TV show. But as much as I love Damon and Carlton, they might need to fess up to that little mistake there.

Many see “Across the Sea” was a failure. I don’t. I see it as more of a partially missed opportunity. And I can’t stress it enough — nobody would be complaining if this had come earlier in the season. If it had followed “LA X, Part 2,” it would have been hailed as a classic. It has fantastic character writing, but it tells an origin story that’s stretched out and vague enough to warrant at least one more follow-up. With all the filler this season — “What Kate Does,” “Recon,” “The Package,” and “Lighthouse,” to an extent — you’d think time management would have been a bit more of a priority for the writers.

Regardless, the episode felt like another version of “Ab Aeterno,” and while that might have worked for Richard, it didn’t work for Jacob. Not so late in the game, anyway. Let’s hope the final two episodes yield more fruit than this episode did. C

(I’d like to note that my ratings for these episodes are not meant to be comparative — I judge each episode on its own merit, including placement in the season and other such attributes. So while this episode might have scored lower than other episodes this year, I don’t mean it’s the worst of the season — it wasn’t the best it could have been. It certainly was better than the four episodes I listed above, and possibly several more.)