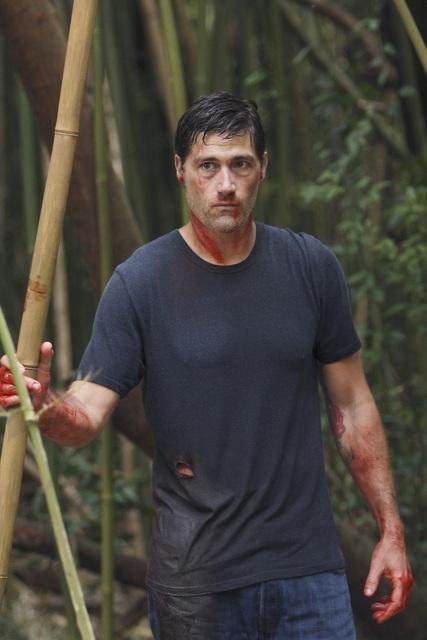 This recap will probably end up being the longest I’ve ever done, and the longest I ever will do, for any show, ever. And who can blame me? LOST‘s series finale, appropriately titled “The End,” is the best episode of television I believe I’ve ever seen. Best series finale? Most definitely. The episode answered so many questions and presented a few more ponderous ones, but the real joy of the episode was, as the writers promised, the characters. If every acting Emmy nomination was filled up by LOST cast members, someone would still not be getting the due they deserve. Michael Emerson was fantastic. Terry O’Quinn was fantastic. Matthew Fox was fantastic. But the real acting lead of the episode was, believe it or not, Jorge Garcia. The Island’s funnyman finally grew up in this episode, and in the end took Jack’s place as the protector of the Island — with Benjamin Linus as his number two.

But before I get too ahead of myself, I must say that the entire episode was an incredible finish to an incredible show. Some were doubters after “Across the Sea” two weeks ago, and I must say that I grew a little edgy. But after watching the gloriously epic yet shockingly intimate finale, I have to say that LOST ended on its highest note, its magnum opus. It was brilliantly done from start to finish, and was surprisingly not the death-fest that many, including myself, had imagined it would be.

Most surprising to me were the Island survivals of Ben and Sawyer. The two had such tragic character arcs that I was sure both of them would see their redemptive ends by the time the finale rolled around. Instead, both lived to see happy endings in both the Island and what I’m now deeming the AfterFlash. Both were at some of their happiest moments when we saw them last — Ben was accepting his dream job as an important leader of the Island, and Sawyer was finally leaving that “damn rock” with Kate, Claire, Frank, Richard, and Miles. Such happy moments abounded throughout the episode, which, in addition to not being a death-fest, was also arguably the happiest episode of the series.

Well, that is, unless you count the fact that Man in Black stuck around for the first hour or so. The Locke impersonator showed up at Rose and Bernard’s camp to retrieve Desmond, who willingly surrendered in order to save the lives of the happy couple, who had “retired” from all the “drama” around. If he hadn’t given in, the Man in Black had promised to kill the two — painfully. The character, goal-set, was not in the mood for playing games. Unfortunately for him, Jack liked surprises.

After some traveling and deliberating, there was the inevitable confrontation on the hill between Team Jack and Team MIB. Kate, angry, tried to shoot down MIB, but he told her to save her bullets, cavalierly showing off his impermanent immortality. Jack, MIB, and Desmond then set off for that wonderful hole in the ground which led to the heart of the Island. They decided to simply let the outcome of Desmond’s journey into the heart determine which of them was right and which was wrong. Desmond, gleefully thinking that he was activating the flash-sideways timeline, swaggered into the hole and found himself in a basic tomb. Corpses bathed in golden light were littered left and right. I’m not sure who they’re supposed to be, but I’d like to think they were the Egyptians who had lived on the Island at some point.

But the tomblike aspect of the cavern wasn’t what Desmond was going for. A big pond at the center of the cavern glowed with white light, so Desmond decided to go where the “light shone the brightest.” That was around a giant white stone, covered in hieroglyphics, which he promptly decided to move. Bad idea, Des. The shocks he received when he stepped into the surrounding water should have been warning enough, but he paid them no heed until the rock was out of its place and the water drained out. Jacob’s metaphor of the Island being a “cork” took on an entirely new meaning, because that rock was the pure definition of a cork. It’s funny how these things work.

Jacob was also right about the cork Â holding down Hell, though, because some fire and brimstone started rumbling from the hole that the cork had left, especially with no water to drown it. Desmond’s screams were just as eloquent as Locke’s “I was wrong” from “Live Together, Die Alone.” MIB reveled in his righteousness, until Jack decided to assault him. After Jack’s fists drew blood from the supposedly invincible MIB (whose power had apparently been linked to the heart of the Island), MIB hit him with a rock and ran off to escape to his boat off the coast of the incredible sinking Island.

The shaking of the Island was enough to knock over some trees, pinning Ben, who I thought was dead then and there. Jack chased MIB to the cove, where the Elizabeth was waiting offshore to take him away. Jack had other plans, though, and assaulted the fellow, taking a rather painful-looking knife to the stomach. However, with Kate’s intervention of shooting MIB in the back (her redemption for years of annoying us all), Jack kicked him off the cliff, just like MIB did to Jacob. The parallelism in this episode was so strongly nostalgic, but it really worked for giving the entire series a really cohesive feeling.

Meanwhile on the Island, Miles found Richard lying in the jungle just outside the Barracks. He was wounded, but not badly — Smokey didn’t slam to kill. He able to get up and was desperate to continue their quest to blow up the Ajira plane. So they took off in an outrigger canoe, and soon found Lapidus floating around in the wreckage of the submarine which had floated to the surface. I knew my question marks weren’t in vain, people! I knew it! Frank convinced the two of them that blowing up the plane was not the smartest idea, and that he could get them off since he was the pilot. Richard and Miles decided to go with it, and they ended up making contact with the people at the cliff through the walkie-talkie link between Ben and Miles. Sawyer and Kate decided to head off to the plane, while Ben and Hurley decided to stay with Jack, though for very different reasons — Ben had a “go down with the ship” mentality, while Hurley simply wanted to stick with Jack.