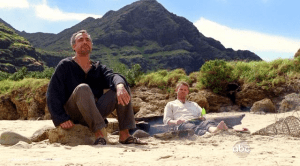 Fear no longer, because in a few weeks, we’re going to have an episode entirely dedicated to that story. That’s right — episode 6.15, entitled “Across the Sea” will focus exclusively on Jacob/Man in Black. How “exclusively” do we mean? Well, let’s just say that the episode will feature absolutely zero members of the main cast. None. From what I’ve been able to dig up, it’s just going to have Mark Pellegrino and Titus Welliver (who we saw briefly as the Man in Black in “The Incident”).

If this isn’t the first time this has ever been done on television, I’ll eat my hat. Groundbreaking, I tell you.

Here’s a little bit more of excellent scoop: according to Kristin dos Santos of E! Online, the episode will take place in the year 23. Obviously that’s a long time ago, and that will probably set some of the stakes for the big game that has been going on between Jacob and the Man in Black.

That’s a long time gone from the nineteenth century Jacob and Man in Black that we saw watching the Black Rock arrive in the opener of “The Incident,” so what could that possibly mean? According to Michael Emerson, it’s not on the Island. “It’s set in a time and place that you will never have seen on a network series before. When was the last time you saw a network drama episode that none of the series regulars were in the episode?”

The episode, penned by Damon Lindelof and Carlton Cuse, will air on May 4. The end is getting nearer, and I’m getting more excited.
Prev Article Next Article